Herm Edwards on 2008 Chiefs: 'I was coaching a college team'

Share All sharing options for: Herm Edwards on 2008 Chiefs: 'I was coaching a college team' 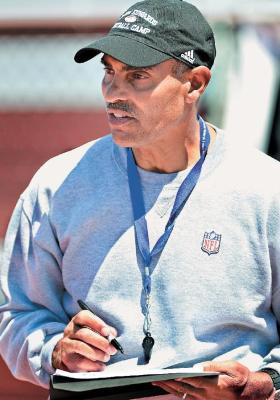 Herm Edwards is back into coaching. Sort of.

He's conducting his 14th annual football camp this weekend at Monterey Penninsula College in Monterey, CA. The Monterey Herald is Herm's local newspaper if you will. He contributed a weekly column to the paper back when he was coaching the Chiefs and he's got family in the area.

The paper caught up with Herm at his camp and the former Kansas City Chiefs head coach gave us some good quotes, as usual.

"I want to be the best analyst,'' said Edwards, the Eagles second all-time leader in career interceptions with 27. "I am learning with each show. I wanted to be in the studio. I didn't want to do games."

On getting back into coaching right now...

"As you get older, priorities change,'' Edwards said. "Why would I want to go back to working 17 hour days? I want to spend more time with my two daughters. I missed a lot of that when my son Marcus was growing up."

On explaining how instead of winning you made players better people...

Herm knows he was responsible for the make up of last year's team, right?

"We lost seven games by seven points or less last year,'' Edwards said. "Why? We had no experience. We had to do it with 20 rookies. We couldn't finish in the fourth quarter. I was coaching a college team. But I had fun. And we got better. I believe I've made it better for the next guy.''

Argh. I really don't mind Herm Edwards at all. In fact, I really like the guy. He was just in way over his head as an NFL head coach. But man, reading quotes by him like that last one just pisses me off. He knows he screwed up and he's acting like he wasn't the one behind the whole 2008 Chiefs Youth Movement.