Share All sharing options for: Chargers' Cromartie Trashing the Chiefs

Defensive back Antonio Cromartie is already trashing the Kansas City Chiefs, their passing game and Dwayne Bowe.  Cromartie of course predicts his San Diego Chargers will be making an appearance in the Super Bowl....if they play up to their ability.

Only problem?  The Chargers seem to never play up to their ability when it counts.  They've had what many people call the most talented team in the NFL for several years now and haven't won a conference championship game since 1994 when the San Francisco 49ers throttled them 49-26.

Anyway, Cromartie held a chat on NFL.com and had a few things to say about the Chiefs.

When asked about stopping the Chiefs passing game with Matt Cassel now in the division, Cromartie said:

They never had a passing game. They don't even have Gonzalez.

Then when being asked about what's so hard about covering Bowe:

Dwayne Bowe only has two catches on me in two years, so I've never had a hard time against him.

Yep...that's the corner for the Chargers team that "stomped" the lowly 2-14 Chiefs by a combined two points last season.  And, for the record, our Coastal Carolina quarterback put up 263 yards passing against Cromartie's Chargers.

Cromartie also said Philip Rivers was the biggest trash talker on the team.  Uh-oh, I hope the cat wasn't let out of the bag with that one or Philip will get mad and pout!  Hmph! 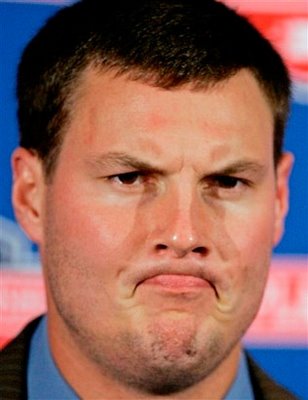 If I were a betting man, I would put my money on the Chargers to win the AFC West this season.  After all, they are the kings of the regular season.

For the record, Dwayne Bowe has 25 receptions for 325 yards and two touchdowns against the Chargers in his first two years in the league.  Nice work, Antonio.  Your interception rate in 2008 would have tied you with our two rookies, Brandon Flowers and Brandon Carr for second place on the team.