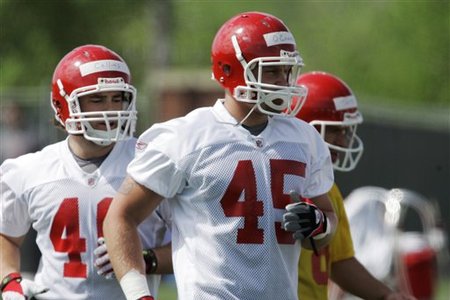 The Kansas City Chiefs have agreed to terms with seventh round pick Jake O'Connell.

The 237th pick in the 2009 NFL Draft, the team's second of three seventh round picks, O'Connell hails from the University of Miami (OH) where he snagged 46 passes for 453 yards. He appeared in 41 games with Miami (OH), which means the team has plenty of tape on him.

O'Connell figures to be competing with the other tight ends on the roster including Brad Cottam, Sean Ryan, Tony Curtis and Tom Crabtree.

Head coach Todd Haley recently reiterated that the competition for the starting tight end is far from being given to the presumed starter Cottam, who only caught 21 passes while at the University of Tennessee.

O'Connell and Crabtree are friends from the University of Miami (OH).

O'Connell recorded seven special teams tackles in college which could be encouraging because Haley said recently said the easiest way onto the team is via special teams.

Seventh round picks aren't always a lock to make the roster but remember the Chiefs traded next year's seventh round pick to the Miami Dolphins to secure the rights to O'Connell so there's something there they like enough to warrant a trade.