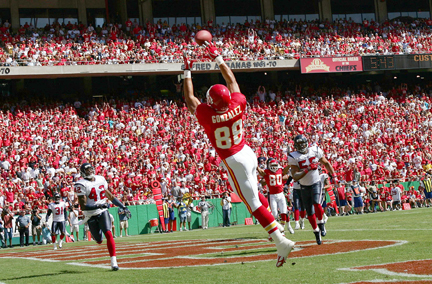 The folks over at the four letter network recently engaged in ranking the best of the decade.  There are all kinds of lists over at ESPN.com but two big ones jump out at me.

Teams of the decade

First, the Chiefs were ranked the 25th best team of the decade.  This is slightly low in my opinion.  The Chiefs racked up 60 wins in the first seven seasons (among the best) only to crawl to six wins over the last two seasons.

Here's how the entire AFC West shook out:

Ugh...Oakland ranked ahead of us?

Offensive player of the decade

Bill Williamson compiled his own list for the AFC West and Tony Gonzalez came on top as the offensive player of this decade.  Here's what he had to say:

It takes a lot for a tight end to be the offensive player of the decade, but Gonzalez is a worthy selection. He was dominant for the entire timeframe. He owns every NFL receiving record for tight ends.

He was consistent throughout the decade and was the face of the Chiefs until he was traded to Atlanta prior to the draft. Some teams don't value the tight end position, but a player like Gonzalez shows how disruptive the tight end can be.

Of course I'm not going to argue with this one.

Special teams player of the decade

Dante Hall....Of course he is.  No one else in the AFC West came within a mile of making the impact that the X Factor did in the West.  Here's what Bill had to say:

In his prime with Kansas City, Hall was the best returner in the NFL. He was a must-see player every Sunday. He won games for Kansas City with his impossible, turn-back-run-across-the-field touchdowns.

Seeing Hall celebrate a touchdown return with the Arrowhead Stadium crowd was one of the better sights in the league. From 2000-2006 in Kansas City, Hall returned six kicks for touchdowns and five punts for scores. He was brilliant.

The 'moment of the decade' was of course the Tuck Rule, where the Raiders lost to the Patriots.  The Raiders then went on the worst six year stretch in NFL history.