The Greatest Kansas City Chiefs, By the Numbers: #13

Share All sharing options for: The Greatest Kansas City Chiefs, By the Numbers: #13

Before we begin this post, which will undoubtedly end up with Steve Bono as the poll winner, please click play on a video I get immense joy out of posting on here (for about the fifth time now):

And to add even more layers of unbelievability , this is from SI.com:

Even more amazing than the run was what Bono had said in the huddle after receiving the play from the sideline. Convinced that the play-action bootleg would burn Cardinal coach Buddy Ryan's aggressive defense, Bono, who normally exudes the personality of a tackling dummy during games, told his stunned teammates, "Guys, I'm taking it to the house."

Need anymore convincing about who to vote for now? Here are the Chiefs to wear #13 throughout the franchise's history:

Strikes you as not that many players, right? I guess you can chalk that up to superstition and not wanting to wear an "unlucky" number. I put unlucky in quotes because supernatural forces like that, um, don't exist. It's all in your head, people.

Click through for some more info on these guys and make sure you vote. 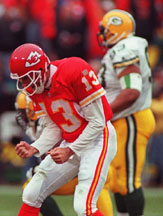 In 1994, the Chiefs were convinced that any quarterback from San Francisco even if his name wasn't Montana was a good bet to sign. Steve Bono spent a good portion of his fourteen year career in the NFL as a backup to some of the game's great quarterbacks of all-time. Bono backed up Joe Montana and Steve Young from 1989 to 1993 in San Francisco. In 1994, he came to KC and backed up Joe Montana while he was a Chief. He backed up Brett Favre in Green Bay in 1997. And before his final season in the NFL in Carolina in 1999, Bono was second on the depth chart in St. Louis behind Tony Banks and ahead of...Kurt Warner.

Bono's time in KC was by far the most active time of his career. He was 21-10 in KC, completing 55.3% of his passes. He also passed for 37 TDs and 27 INTs while a Chief. He made the Pro Bowl in 1995 after starting all 16 games for the Chiefs and leading them to a 13-3 record. Bono played great that season, bolstered by a nasty rushing attack consisting of Marcus Allen, Greg Hill and Kimble Anders.

After three seasons in San Diego and one in Cincinnati, Wayne Clark came to Kansas City and...did nothing. No passes attempted. There is no news about him being a Chief from 1975.

Pope punted for the Chiefs for one season before moving on to a mediocre career with the Bengals and Jets. He only played in three NFL seasons. During his time in KC, he made 101 punts and averaged nearly 42 yards per punt. He also had two punts blocked that season.

Vlasic was a San Diego Charger for four seasons before he came to Kansas City. His time in San Diego was defined by struggling to compete for the starting QB job against Jim McMahon and Billy Joe Tolliver to name a few. In the middle of the 1988 season, Vlasic was named the Chargers starting QB but blew out his knee the next week.

Vlasic spent the 1991 season in KC backing up Steve DeBerg. You probably most famously remember Vlasic for stepping in for an injured DeBerg in the '91 playoffs. In three quarters, Vlasic was 9/20 for 124 yards and threw four INTs. He spent the 1992 season backing up Dave Krieg, who played every snap that year. When Joe Montana came to KC in 1993, there wasn't any room for Vlasic and he was let go.