The Greatest Kansas City Chiefs, By the Numbers: #12

Share All sharing options for: The Greatest Kansas City Chiefs, By the Numbers: #12

Lots more quarterbacks for you to read about today. Geez, how many QBs did the Kansas City Chiefs have in the 1980s? I almost can't get over it.

Our main man Brodie Croyle wears #12 now. You think he has a shot to usurp say a Rich Gannon for the greatest Chief to wear #12? I doubt it.

Click through for info on these guys and make sure you vote.

Baker was the third kicker brought in during the 1999 season for kickoffs. The Chiefs had been shorting kick offs all year long and on the final day of the season, against the Raiders, Gunther Cunningham's squad found them fighting for their playoff lives. Win and get into the playoffs. Lose and you're out.

After giving up a 17 point lead, the Chiefs found themselves in overtime at Arrowhead Stadium. Jon Baker, the Chiefs' kickoff specialist, makes a barefoot kickoff to start overtime that....goes out of bounds! The Raiders get the ball the 40-yard line. Raiders QB Rich Gannon leads the team down the field where the Raiders win on a 33-yard Joe Nedney field goal to dash the Chiefs' playoff chances.

Welcome to the 21st century Chiefs fans. Baker was released literally minutes after the game, if I'm not mistaken (Well maybe on the following Monday).

Espinoza was an undrafted free agent from Iowa State who came to the Chiefs during the 1987 strike year. When QB Matt Stevens went down against the Dolphins in Week 5, Espinoza came in in relief and passed for 69 yards, going 9/14. He also threw two INTs in his only NFL game.

Flores came to KC for only one season in 1969 as a backup QB to Len Dawson. He completed one pass and it was for a touchdown.

But that's not the most interesting part about Flores' career. He is one of only twenty players to play for the entire 10 year existence of the AFL. Him and Mike Ditka are the only two people to win a Super Bowl as a player, assistant coach and a head coach. Flores of course won the '69 Super Bowl with the Chiefs; he won Super Bowl XI under John Madden as an assistant coach; and he won two Super Bowls as the head coach after Madden left. 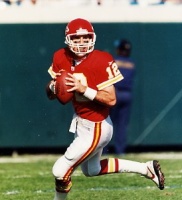 Gannon came to the Chiefs in 1995 and served as QB Steve Bono's back up for the first two seasons he was in KC. He started only three games in those first two seasons before stepping in for an injured Elvis Grbac in 1997. Gannon went 5-1 that season as a starter, helping lead the Chiefs to a 13-3 record that year.

You know the story from there. The fans wanted Gannon (most of them anyway) to start the Chiefs playoff game against Denver that year but Gunther Cunninghman went with Grbac. The Chiefs lost to the Broncos 14 to 10. 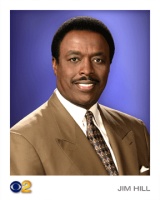 You can tell from the picture that Jim HIll is much more famous now for being the lead sports anchor and sports director at KCBS-TV. He also serves as Studio Host for the both the LA Dodgers and LA Lakers games for KCAL 9 in Los Angeles.

I honestly can't find any stats on him when he was a Chief. I'm guessing he may have been drafted into the AFL and not played. There really isn't a lot of info out there on Hill.

Hailing from good 'ole Bonner Springs, KS, Dave Jaynes was an All-American QB at KU before being drafted by the Chiefs in the third round of the 1974 draft. He played in two games during the 1974 season, throwing only two passes, one which went for an INT. He is much more well know for his college accomplishments than his short NFL career.

Perez was a decent wide receiver prospect coming out of Murrary St. before he blew out his knee during the 2000 NFL preseason. The Chiefs sent him over to NFL Europe after that. He didn't accumulate any stats before the Chiefs released him.

Quinn sat at the bottom of the Chiefs' QB depth chart during the Trent Green era, which means he didn't even get into any regular season games. Trent started every game for five straight seasons. Quinn played for the Bears briefly before a stint in the AFL with the Kansas City Brigade.

Quinn was the offensive coordinator for MidAmerica Nazarene University from 2007 to 2008. Just this past spring, he was named the head football coach there.

By far the coolest thing Dennis Shaw has done is throw nine TD passes in one game as an SDSU Aztec in 1969. He was a second round pick in 1970 and played for the Bills, Cardinals, Giants and finally the Chiefs. He didn't record any statistics in his one season as a Chief.

Wilson played in 42 games over three seasons with the Chiefs and Texans, only starting one game during that time. He completed 50% of his passes while in KC and had a 4:3 touchdown to interception ratio.