What They're Saying About the Chiefs Signing Mike Brown

Share All sharing options for: What They're Saying About the Chiefs Signing Mike Brown 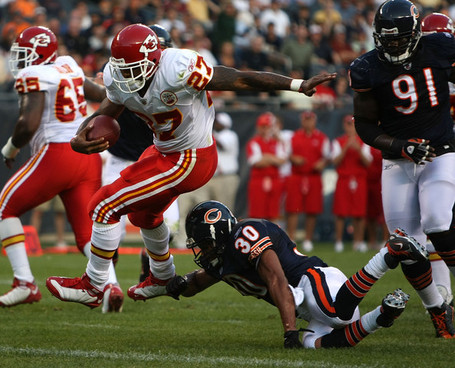 Exactly three weeks ago today, reports surfaced that the Kansas City Chiefs were bringing in former Chicago Bears safety Mike Brown for a visit.  That day I asked one of my good friends and Chicago native to let me know what's up with Brown and what he can do for the Chiefs.  Here's what he had to say:

Yeah I think hes really good, unfortunately just keeps getting injured. Last year was the most he has played in a long time. He kind of anchored our D…when he was out we couldn’t do as much. I honestly believe we could have won the Super Bowl (in 2006) if he was playing. That said, very small chance you get even 12-14 games out of him.

Now that the report by Adam Teicher of the Kansas City Star has settled in, I wanted to take a look around the blogosphere to see what everyone else is saying about the Chiefs new addition.

First, WCG over at Windy City Gridiron was kind enough to sum up a few of his thoughts on Brown's time with the Bears and what the Chiefs might expect out of him in 2009.  Here's what he had to say:

From the time he signed along with Brian Urlacher they became the instant captains of our D.  Mike Brown could have been a Pro Bowl safety for the next 10 years if injuries didn't come into play.

He has an uncanny knack for being around loose balls.  If a ball is stripped or tripped, there is a very good chance he will be around to collect it.  He is very good playing up on the line of scrimmage and plays the run very well.  If not for the injuries I have no doubt that he would be talked about like Bob Sanders is for the Colts.

The problem is the injuries.  Prior to last season he couldn't keep on the field and it made it difficult for the Bears to ever solidify their secondary.  Last season he played I believe every game the problem is you could see the injuries had affected him.  He has lost a step and isn't as dynamic.

If you can keep him on the field you have gotten yourself a guy who can lead a defense and has a high football IQ.  I don't think you will ever get what we had his first few years.  The wear and tear has taken its toll.   But in situation play or if your scheme allows a safety to play up front, you've potentially got yourself one hell of a player.

Many thanks to WCG for taking the time to help us out.  And check out Windy City Gridiron, after all they're the folks that took Jay Cutler out of the division.  Plus, it's the oldest NFL blog on SBNation.

Take a quick look over his career stats and then after the jump I've rounded up a few more stories from various outlets on the Chiefs signing the former Bears safety.

When Brown came to visit the Chiefs it seemed like a match made in heaven.  Scott Pioli had already acquired two defenders in Zach Thomas and Mike Vrabel to help stabilize the young Chiefs defense and Todd Haley knew him from their days in Chicago together. Clearly the injuries have to be a concern, but I already feel a whole lot better about the depth at safety.

Brown gives Kansas City another new leader on defense. General manager Scott Pioli brought in linebackers Zach Thomas and Mike Vrabel this offseason. Like Brown, Thomas and Vrabel are players over the age of 30 known for their leadership skills.

With these three veteran players in the fold, the mostly young Kansas City defense should be brought along nicely. Brown is not a unit-changing player, but he has enough skill remaining that he should help the team if he can stay healthy.

Some of the responses from AP members have been negative, some have been positive.  Me?  I approve of the signing.  He'll provide some leadership in the secondary.  Remember, while the secondary did play well last year, we're talking about very little service time for most of these guys:

That's the core of the secondary there, in addition to seven year veteran Jon McGraw.  I'm not expecting Brown to be an all-world player but I do expect him to rub off on some of the younger guys.  Hey, what can it hurt?