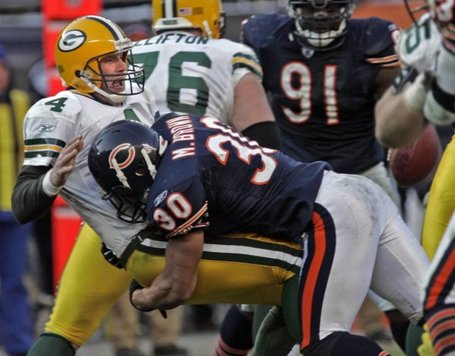 The Kansas City Chiefs have agreed to terms with veteran safety Mike Brown according to Adam Teicher of the Kansas City Star.  Previously with the Chicago Bears for nine years, Brown has appeared in 100 games and garnered five sacks and 17 interceptions.

Teicher speculates he could be challenging one of the Chiefs incumbent safeties, Jarrad Page and Bernard Pollard, for a starting job.

Back on June 3rd we heard that the Chiefs were bringing the safety in for a visit but nothing more came of it.  Considering the Chiefs wrapped up their offseason program on June 16th, the timing makes sense.  Brown will be entering his 10th year in the league and likely didn't want (or need) to attend the offseason program.

Brown was instrumental in the Bears' 2006 Super Bowl season.  He missed the Super Bowl but a lot of folks around Chicago think the game would have been much different had he been healthy.

Brown appeared in 15 games for the Bears last season but has missed 44 games over the last five seasons.  He's definitely injury prone but was likely added to provide depth to the Chiefs current stable of safeties  Page, Pollard, Jon McGraw, DaJuan Morgan and Ricky Price.

It'll be interesting to see what his contract looks like.  If there's any sizable signing bonus then he's got a good shot of making the final 53.  As a fully vested veteran, his 2009 contract will be automatically guaranteed if he's on the opening day roster.

That's six safeties on the roster now.  Who's not going to make the final 53?