Share All sharing options for: Listen to Chiefs QB Matt Cassel on the Jim Rome Show 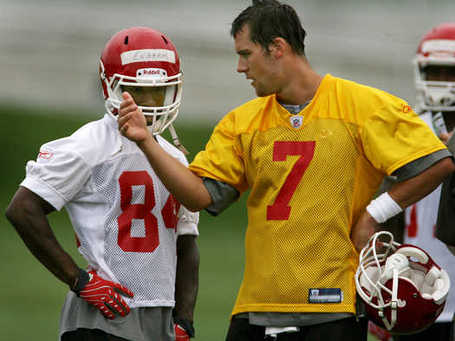 Matt Cassel appeared on the Jim Rome show yesterday.  WarChief called it an amazing interview.  You can decide for yourselves by listening to the interview by clicking here (H/T 610 Sports Twitter for the link).

They talk about the importance of the offseason program, Tom Brady, receivers and similarities to Todd Haley and Bill Belichick.

The player Cassel is most impressed with?  Larry Johnson.

Jump over and check out the notes I made of the exchange between Rome and Cassel and I also posted video of my favorite Jim Rome moment.

On finally getting a chance to call a team his own

It’s been exciting.  It’s been a long time coming.

To finally have your own team and call yourself the starter is a great thing.

The importance of the offseason program

You’re starting to lay the groundwork here.  I’ve been here all offseason working out and getting to know everybody.  I’m trying to set an example of my actions on the field and also off the field.

It’s really tough at times, especially you put in all the hard work and you’re going to get that shot and that opportunity and it doesn’t work out.

Sometimes you think, ‘Is this all it’s going to be?’

Tom Brady as a mentor and teammate

He’s been one of the closest friends I’ve had since I got to the NFL.  I don’t know how blessed I’ve become. But I’m definitely blessed to have a guy in my corner since day one when I was a rookie.

I was able to watch him, his professionalism both in the classroom, the weight room and the weight room.  It took mental notes and thought if I ever get to be a starter in the league, this is what I want to try to emulate.

I still talk to him about once a week.  And bounce ideas off and if anything comes up he’s the only guy I know I can go to with confidence and I know he’ll give me the right advice.

Stepping in for Brady last year

Everybody’s looking to me saying ‘What’s this guy gonna do?’  So I had to prove it on the field first.

The players’ confidence grew and they said, ‘Hey we can win with this guy’

Haley’s mindset coming into the offseason

Not yet but you can tell he brings a lot of fire.  He’s a young and energetic coach.  He’s a guy that’s well organized and he sets the program up to compete.  He wants everybody competing and he’s on everybody about it.

To be honest, we’re a young team. We need someone whose going to push us and challenge us.

I’ve never seen anyone more involved, especially in the offseason.  He’s with the guys in the weight room every day.

Coaching similarities between KC and NE

You can’t get coached any harder than what they do there.  With the environment Bill Belichick sets up there is very similar to what Todd Haley is bringing to the Kansas City Chiefs.

We get comfortable and we get complacent and that’s the thing you’ve always gotta resist.

On the Chiefs receivers heading into 2009

We’ve got Dwayne Bowe, we’ve got a guy in tight end in Cottam, and we’ve got Larry Johnson and a number of other receivers working their butt off. From where we were earlier in the offseason to where we are now, we’ve made great strides both offensively and defensively.

Some praise for LJ

The guy I’m telling you, to be completely honest, has impressed me the most is Larry Johnson.  His work ethic and his dedication and some of the runs he’s already made..  I know we’re not in pads right now but he’s showing already he’s coming with a n attitude and hopefully we’re expecting a big year out of him.

I reached out to quite a few players before I even got there, just to introduce myself and get on the same page.   He was one of the guys I was lucky enough to get a chance to talk to when I got there.  We hit it off right away.  He’s one of the guys I’ve got a lot of respect for.

We need him to step up this year, there’s no doubt about it.

There’s no doubt I’d love to be in KC for multiple years.  They’re trying to get it done. I honestly try to stay out of it because it’s more distracting than anything else.  There’s a business side to it.

This is the first time I’ve ever been involved in a contract negotiation because I’ve been in my rookie contract.

I let my agent do his deal and that’s why you hire an agent and Scott and those guys will figure it out and we’ll go from there.

Deal’s not done, but they’re talking

I hope so, I don’t know if it’s close or it’s not or what the deal is right now.  They are in discussions.  That’s all I can say about it.

I wouldn't be doing my duty to you all if I didn't show you the greatest Jim Rome moment when he is attacked by Jim Everett.