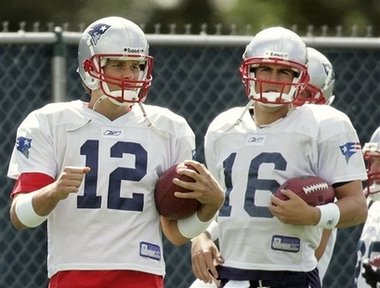 Like Matt Cassel, Joe Theismann was pedestrian in his first four years in the NFL.  He started 11 games in his third and fouth seasons, winning seven, and never completing over 50% of his passes.  Despite the fact that Cassel is following a similar mold, Theismann apparently thinks his value was higher than the second round pick the Kansas City Chiefs sent the New England Patriots on the first day of the 2009 League year.

Speaking to WEEI (H/T Ryan at KCChiefsblog for the link), Theismann didn't go as far as Jay Mariotti in suggesting there should be a league investigation into the trade, but hinted at a sweetheart deal of sorts between the two former colleagues Bill Belichick and Scott Pioli.

Check out what Theismann had to say on Cassel after the jump.

"I want to know if Bill’s got any more deals -- on houses, cars, boats, planes," said Theismann with a smile. "Is there anything else out there he might want to get rid of? For 500 bucks, maybe I can get a home out on Nantucket."

Theismann went over the obvious that the Patriots were unlikely to carry $30 million in salary at one position and took what they could get at the time.  He said that while Belichick is known as a defensive guru, his offensive mind is underrated and among the best in the league.  "He knows what his football team needs -- and it didn't need Matt," the former Redskins quarterback said.

The biggest question mark facing Cassel as he enters his first full season as a starter on a team not named the New England Patriots is whether he can step out of that system and still excel.  That shouldn't be a problem, according to Theismann.

"He’s seen everything. It’s not like he took over for four weeks or six weeks. He played an entire season," Theismann said of Cassel. "People had a book on Matt Cassel after Week 10. It’s not going to be any different after Week 16.

"So in my mind, the book is sort of out the window because he’s not a rookie. He spent some time in the league. Yes, it’s the first time he’s played a lot, but the mistakes he made, he’s going to grow from as well."

True, the league does have a full slate of games to watch Cassel, but there's still the question of whether he can put up the same numbers without arguably the best wide receiver tandem in the NFL.