The Greatest Kansas City Chiefs, By the Numbers: #10

Share All sharing options for: The Greatest Kansas City Chiefs, By the Numbers: #10

Chances are, Terrance Copper, who currently wears #10 for the Kansas City Chiefs, won't be the greatest player of all-time with that number.

Let's see what greats have worn #10 over the years in KC:

Click through for more info on all of these guys. Make sure you vote!

After amassing some rather bland passing statistics as the Kansas City Chiefs first round pick in the AFL for over three seasons, Pete Beathard was traded to the Houston Oilers. After three seasons in Houston, Beathard made his foray into the then young NFL, playing for the St. Louis Cardinals and Rams before making his way back to Kansas City in 1973. Over his five year career in KC, Beathard completed 43.3% of his passes; passed for 1,649 yards; and had an 8:13 TD to INT ratio.

Drafted in the second round out of Wake Forest, Elkins fell into that late 1980s through 1990s QB development abyss the Chiefs had rocking in KC. Despite being a second round pick, Elkins found himself low on the depth chart pretty quickly, with QB Steve Deberg holding tightly onto the team's starting spot.

Elkins only made two pass attempts as a Chief - one completion and one interception.

Of course you do. Playing for the Chiefs for six seasons, Green hold five of the ten all-time best passing seasons in team history. Over those six seasons, Trent completed 61.9% of his passes; passed for over 21,000 yards; and had an 118:85 TD to INT ratio. Let me let Wikipedia take over for a second here:

With a third consecutive 4,000 yard season, Green joins Drew Bledsoe, Brett Favre, Peyton Manning, Dan Marino, Dan Fouts and Warren Moon as the only quarterbacks in NFL history to pass for more than 4,000 yards in three or more seasons during their careers. Green has the distinction of having three consecutive seasons with a QB rating of 90.0 or better. Green has started 80 consecutive games during his first five years with the Chiefs, a team record.

Hmm. You think he has a chance to win this poll?

Livingston spent his entire football career in Kansas City with most of the years spent backing up QB Len Dawson. And it was Livingston's incredible play as a backup that we as Chiefs fans have to thank for the franchise's only Super Bowl.

In 1969, Len Dawson injured his knee during the second game of the season. In six games of relief, Livingston led the Chiefs to a 6-0 record during that stretch before Lenny came back and the Chiefs got their only ring.

Not to be confused with former RB coach James Saxon, Jimmy Saxton produced meager stats in one season for the Dallas Texas. He was drafted in the 10th round of the 1962 AFL draft.

Drafted by the Seahawks in 1984 in the supplemental draft, Frank Seurer surfaced again in 1986 in Kansas City. While in KC, played in nine games, starting two of them. He played mostly during the 1987 strike shortened season and fell out of football after a car accident in spring 1987. Seurer is probably most famous holding a number of KU football passing records until Todd Reesing came along. 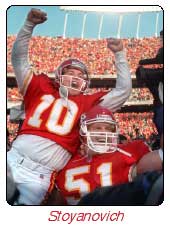 The long time Miami Dolphin came to KC in 1996 to replace the kicker who shall not be named and for that, we love him. Stoyanovich was a pretty reliable kicker for the Chiefs, making 80.9% of his kicks over his five year stay.

Van Pelt was drafted by the Steelers in 1993 after a great college career at Pitt, where he studied under Paul Hackett. When the Chiefs were having some nagging injury issues late in the '93 season, the team signed Van Pelt who was cut by the Steelers during training camp. Once Joe Montana came on board though, there was no room for Van Pelt and he was released.

Who is the greatest Chief to wear #10?