How Effective were the Chiefs 2008 Receivers?

Share All sharing options for: How Effective were the Chiefs 2008 Receivers? 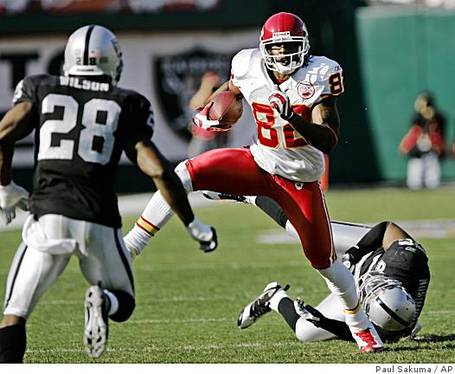 The 2009 Kansas City Chiefs receiving corps are already getting a bad wrap.  It was widely recognized that Tony Gonzalez was the best receiver on the 2008 version of the Chiefs and with him gone, what's a team to do?

Dwayne Bowe is the number one wide receiver heading into '09 and judging by his first two seasons, he's ready to take on the role.  Yes, he does drop some balls, but it's not as bad as you might think.  Let's take a look at how effective the Chiefs 2008 receivers were and what information we can glean from this (if any) to predict how the 2009 Chiefs receiving corps will fare.

This confirms what we've all known (for about 12 years). Gonzalez had the surest hands on the team.  TG's numbers aren't the best in the league but this type of sure-handedness certainly allows him the consistency to be considered one of the best in the game.

Click through to see more on yards, drops and receiver effectiveness.

How did the top receivers in terms of yardage fare when looked at receptions over targets?

While Dwayne Bowe's numbers are slightly less effective than his rookie season (59.8%), there's no cause for concern.  His numbers are in line for where I think he'll be in 2009 - on the cusp of a top 10-15 wide receiver in the game.

An elite slot receiver, like Wes Welker, caught about 75% of the balls thrown to him.  By the way, in 2007 Engram would have been considered an elite slot receiver by my standards - he caught nearly 71% of the balls thrown his way.  Even in an injury plagued 2008 he caught 58% of them, which would have put him slightly behind the great Tony Gonzalez on the 2008 version of the Chiefs.

As you can see, Bowe's issues dropping the ball aren't as bad as the guy many consider to be the next great up and coming receiver in the game - Calvin 'Megatron' Johnson.  Judging by these numbers, I don't think it's fair to put Bowe in the 'Oh my gosh another drop!' category.  He's effective, albeit a little slippery handed, but isn't quite in the Braylon Edwards/Terrell Owens poster boy for drops category.
***
I think the knock on Bowe for drops is overblown.  His first two years in the league are rivaled only by few receivers in the past 20 years.  2,000 yards in your first two seasons is an outstanding number and with Gonzalez gone, expect him to get even more looks which translates into even more opportunities.