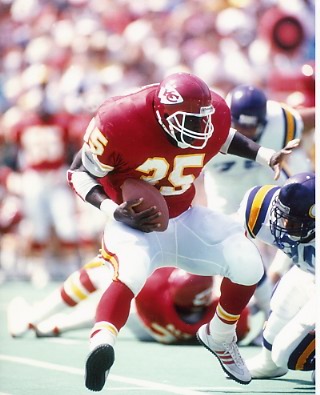 Recently, our AP interview series took us back a few years to catch up with Kansas City Chiefs All Pro RB Christian Okoye. Don't forget to check out Part One of the conversation to hear about his playing days, working with Head Coach Marty Schottenheimer and why there was no friction with Barry Word.

In today's segment, the Nigerian Nightmare speaks about his charitable work with the Okoye Foundation, what he's most proud of when he looks back and gives us his take on the hot button of health coverage for former players.

AP: When you look back, what are you most proud of?

Christian: I'm just so proud that I was able to play in the NFL. Very few people are really able to do that, so it's a blessing to think that I played there and the fact that I met so many good guys while I was out there and I get to see the coach's prototype like Marty. When you spend so much time with him, you really get to know him, not only from football but also about life. So it's those kinds of things that you're the most proud of.

AP: How much do you keep up with football today?

Christian: Of course, I'm a Chiefs fan and so I root for them before I root for anybody else. The only time I can root for anybody else is when I can root for the Colts when Tony Dungy was there and the Jaguars because Jack Del Rio is there. Those are guys that came from Kansas City, so if someone was from there and now they're somewhere else, I'm interested to see how they are playing.

AP: Do you have any thoughts on the current Chiefs team? For example, on their house cleaning in much the same way you saw with the team.

Christian: No, I don't have any thoughts. I mean, football is about winning. Carl was there for 20 years, so it was time for somebody else to come in and try to help the team. The team felt it was time for them to move on and get some new faces in there and they did it. As far as the players and the coaches, only time will tell to see how that will work out. I know they got a quarterback in Matt Cassel, so that's an A-plus.

AP: Do you feel the game has changed much?

Christian: Well, I don't know. I mean, it's still football. If anything has changed, it would be the rules and the money. The guys make more money now and the rules of the game are limited now. There were a lot of things back then they wouldn't call that they call now, so that's going to prolong player's careers which is good.

AP: Much has been made of compensation for former players...

Christian: Well, all of the money that you hear about... they should provide something for the former players, at least some kind of health coverage. If you've played in the NFL or you've seen some of these older guys, they need hip replacements and medical bills can ruin a guy. If you have replaced knees and hips and broken bones and arthritis, it's really bad and for them to not have health coverage is not good. These guys gave so much to the NFL and that's all they're asking for is medical coverage.

AP: How early did you begin your charitable work?

Christian: I formed my foundation in 1990, which I was still with the Chiefs and of course I was motivated by my upbringing since I grew up so poor. I wanted to make sure to give back to the children and in Kansas City and do something because we all say that kids need help, but it's doing it that really matters.

AP: Is that something you looked forward to working in upon retirement?

Christian: Of course. Doing the work you can do, you can do it anytime - even when you have a full-time job. You can always do it on the side and be a part of what's going on in your community. That's what most important. I always stress for people to come out and volunteer and I always say that when I'm out that we don't just want your money but we'd love for you to come out so you can see where your money's going and know that it's helping. That's what's important. Many people don't know what's going on in their communities because they haven't seen who is in need.

AP: What's been the most inspiring part of seeing the foundation grow in the last few years?

Christian: What motivates me mainly to do what I do is being able to go out and see those kids that we help - those kids that we work with. A lot of the kids we work with are underprivileged kids, so a lot of times they aren't used to people who truly care for them. If you come from a broken home or you go from one foster home to another foster home or from a group home to another group home, people only come around because they have to work. They aren't a real family or brother or sister or uncle and so on.

AP: So what's happening right now with the Okoye Foundation?

Christian: We're getting ready for our annual sports event which is coming up on July 1, so we're getting ready for that. You can find out more at our website. Actually, we're also planning to start another one in Springfield, Missouri, but it looks like we won't be able to pull it off because it's coming up too quick. But we'll still get together and get the kids together and speak to them and introduce the camp. So we'll start another one out there next year in Springfield.

Many thanks to Christian for taking time out to talk with us. If you haven't already, make sure you read part one of the interview too.