The Greatest Kansas City Chiefs, By the Numbers: #9

Share All sharing options for: The Greatest Kansas City Chiefs, By the Numbers: #9 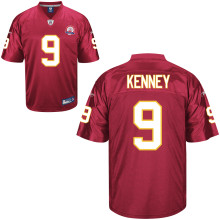 Slim pickings again for the #9 greatest Kansas City Chief. The current Chief to wear #9, undrafted free agent Taurus Johnson, has little chance of making a bigger impact than the player who made the biggest impact on this list - Bill Kenney.

Only one of these guys can be called Pro Bowler, Mr. Irrelevant and Mr. Senator. Click through to check it out. 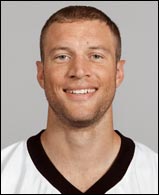 All I'm going to say about Jason Baker is that he did a pretty good job punting for the #1 NFL offense both years he was in KC. How hard is that? Not very, IMO. He didn't even have to punt in the Chiefs '03 playoff game! No way he's getting the top honors for the #9.

Bentley was on the Chiefs' roster for exactly two games in late 1999, as a barefoot kickoff specialist. Oh, what's that you say? He's the guy who blew the 1999 season by kicking the ball out of bounds in overtime? Yes, that is Scott Bentley. I think the Chiefs wasted literally twenty minutes cutting this guy. Of course, no pictures exist of him in a Chiefs uniform, or anywhere else for that matter.

That was apparently not Scott Bentley.

Bentley is currently a customer care manager for a toy company in Colorado.

Carlson was drafted in the seventh round of the 1972 NFL draft (there were 17 total rounds) by the Chiefs and started one second half of one game in his short career in the NFL. He completed 7 of 15 passes.

Jones, a former Wyandotte County football star, was a practice squad/training camp/special teams type receiver who joined the Chiefs at training camp in 1997. After a serious case of the drops in training camp, Jones was bounced from the Chiefs and didn't really catch on anywhere else in the NFL. 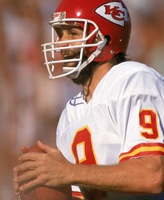 Somebody had to be the quarterback during the dark ages of the 1980. And Bill Kenney did a pretty good job at that, despite the team's overall record during his tenure.

After being selected second to last in the 1978 NFL draft by the Miami Dolphins (Mr. Irrelevant never made the team, making Kenney the de facto Mr. Irrelevant), Kenney was cut during training camp. Two years later, he showed up in Kansas City and became the starting quarterback for basically the next ten years.

The only career starter on this list, Bill Kenney is the runaway favorite #9 Kansas City Chief. You older timers chime in with Kenney stories that us younger guys may not remember.

We're heading back to Austin, TX, soon and if case you didn't know, Sulpher, LA, smells just like freakin' sulphur.