Photos from the Kansas City Chiefs OTA on Monday

Share All sharing options for: Photos from the Kansas City Chiefs OTA on Monday 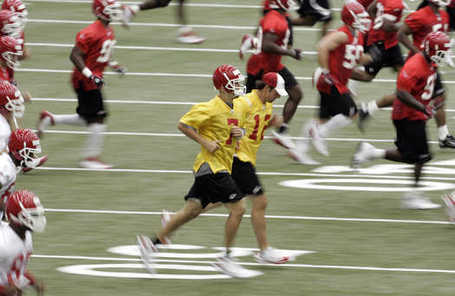 The Kansas City Star has a photo gallery up of today's practice.  Definitely check it out because it is the second to last set of offseason photos you will see from the Star until training camp.  Tomorrow's OTA is the final session open to the media.

By now you've all heard that Mr. Reliable Adam Schefter is reporting that Brandon Marshall has requested a trade from the Denver Broncos.  Per Schefter (via PFT, via GenericBrand in the FanShots), here's how it went down:

Per Schefter, Marshall told Bowlen, "I think I’d like to be traded."  Schefter said that Bowlen asked Marshall to take some time to consider whether he wants a new contract or a trade, and that Marshall is expected to stick to his guns.

And why shouldn't he request a trade?  The Broncos have already set a precedent that in order to get out of town you've gotta publicly whine (Yes, publicly...it's fairly obvious to me that this exchange was leaked from Marshall's camp) and stop returning calls from the owner.

The mothership has an excellent article aptly titled "Thanks for the memories, Trent."

As a player, Green always knew how to cajole the best out of his teammates. He invested his time in getting to know what made them tick. He stayed late on the field after practice to guarantee his timing was in synch with his receivers. He watched video religiously to ensure that he saw protections the same way as his offensive linemen. Like any true professional, he took care of all the little details with precision. Green was often accused of being a perfectionist, which in his book was a high compliment.

Now who does that sound like?  If we could be so lucky to have Matt Cassel turn out to be the next Trent Green.