The Greatest Kansas City Chiefs, By the Numbers: #8

Share All sharing options for: The Greatest Kansas City Chiefs, By the Numbers: #8

Odds are, you haven't owned a #8 Kansas City Chiefs jersey in your life. Unless you really love kickers. Here are the only three Chiefs to wear the illustrious #8 on the back of their Red & Gold.

A couple things right off the bat. I will always remember Morten Anderson for saying he was going to kick until he was 50-years old; the Monday Night game when Nick Lowery made five field goals; and it's going to take a big time celebrity to not make me think of the lead singer of Green Day wheneverI hear the name Billy Joe.

One quick side note this morning. I'm traveling to a funeral this morning so please give Primetime and the others a hand by chiming in with FanPosts and FanShots.

More on each of these guys, after the jump. 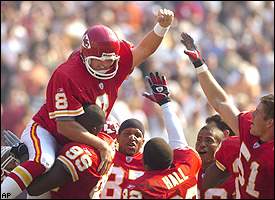 Old man Anderson came to the Chiefs in 2002 after twenty seasons with the Falcons, Saints and Giants. Anderson replaced Todd Peterson on the team, whose 70% accuracy wasn't cutting it anymore.

The current all time NFL leader in points scored, Anderson was born in Denmark in 1960. He came to the United States when he was 17, never having kicked a football before. After only one season of very impressive kicking at the high school level, Anderson was given a scholarship to Michigan State. After kicking a record 63-yard field goal against Ohio St. and being named an All-American, Anderson was signed by the New Orleans Saints in 1982.

Morten went 38 of 46 kicking field goals in his two seasons with the Chiefs. His 82.6% average in KC was the best among the five stops he made in his career.

The connection between Morten Anderson and the Chiefs I remember most doesn't involve him as a member of the team.

It was the final day of the 1996 regular season. The 9-6 Chiefs needed a win to even think about a wildcard spot, considering the Broncos went 13-3 to win the West that year. The Chiefs dropped a dud in a 20 to 9 loss to Buffalo in their final regular season game but they weren't out of the playoffs just yet.

As it turned out, the Chiefs'c wildcard chances rested on then Atlanta Falcon Morten Anderson's foot. With time running down against the Jaguars (who were fighting for a wildcard spot of their own), Morten Anderson lined up for a 30-yard field goal to win the game. The ball was snapped, Anderson appeared to slip as he began his kicking motion and the ball sailed wide left.

Jags in. Chiefs out.

The second greatest kicker in Kansas City Chiefs history, Nick Lowery was a clutch kicker who never made you worry about the kicking game.

Wikipedia has the run down on Lowery's career accomplishments:

In hindsight what is now the dumbest move perhaps all time by the Chiefs' franchise, the team released Lowery in 1993 to make more room under the salary cap. His replacement - *** ****** - would haunt the franchise for years.

Do you think Nick Lowery misses three field goals against the Colts in that 1996 playoff game?

Mr. Toliver made a brief appearance in Kansas City as a third string quarterback in 1997 after Elvis Grbac went down with a broken collarbone in Week 10. He completed one pass a Chief.

Can't say I think this vote is going to be close....