Share All sharing options for: Inside Perspective on Chiefs RB Javarris Williams 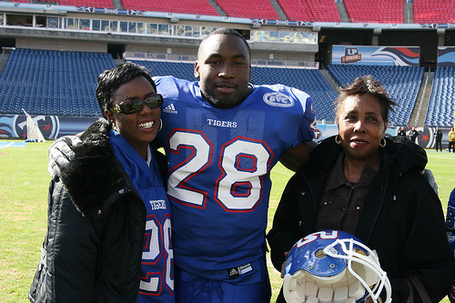 In our latest AP Interview, we check in with Mike Organ, sports writer for The Tennessean, concerning our seventh round choice, Tennesee State RB Javarris Williams. The 1-AA superstar set school rushing records and ran for over 40 touchdowns in his collegiate career. The question, of course, with anyone from that level is how that success translates to the pro game.

We asked that very question of Organ as well as some others concerning Williams and what Chiefs fans should expect from their newest running back.

AP: What do you think are Javarris' chances at the NFL level?

Mike Organ: The big thing that's going to help him is the number of overall running backs that have gotten hurt in the last couple of years. Teams are looking for a guy there ready to go and he's more than capable of filling that role - being a back-up guy. He doesn't have quite the speed to get into the second level right away, but he's a tenacious runner, he's tough as nails and he's got great tackle breaking ability. Then again, the only place we've seen that is on the 1-AA level.

He's got to prove himself in camp that he can break the tackle of NFL players before he's going to really get a shot. That's why camp is so important for a player like him. He was able to run over guys on the 1-AA level as well as run around them, but he has to prove he can do that on the very top level. It's not just the next level for him. The next level would have been Division 1-A. So that's the biggest thing if he can prove he can take two steps up and do what he did in college.

AP: I spoke with Coach Webster from Tennessee State and brought up that very point and he called it "bullcrap" and cited the example of Dominique Rodgers-Cromartie playing in last year's Super Bowl.

MO: Well, the thing with Dominique was he had the tools. I think Coach Webster is right that he had the tools to play on any level because he's tall and fast. He's got incredible speed and that's what I think Javarris is going to have to prove because he doesn't have that 4.2 or 4.3 speed. If you have speed, it works on any level, but Javarris doesn't have that. But a lot of running backs don't have that speed and yet they break tackles. Again he did that here, but we have to see if he can do that at the NFL level. That's his strength. He's deceptively quick for a 230 lb. back, so he hits the hole quick. But as far as breakaway speed, he's going to have to prove he can do what he's done in the past without that.

AP: Seventh round pick. Is that what you expected?

MO: Yeah, that's what he expected and what I expected. He expected mid-to-late rounds and that's right there. I think a fifth round would have been a surprise. Sixth round would have been what was expected and seventh is just what was expected. And really, it's just a position that you can dominate on the 1-AA level but it's a whole other thing on that NFL level.

AP: Obviously the Chiefs saw something there.

MO: Yeah, they did and he does have great toughness. He has a great heart. He will do whatever it takes to make it. He's got a burning desire to play in the NFL and has for a long time. He's just got some hurdles he has to prove he can get over. I'm not saying he can't get over them, but that he will have to prove that he can. Breakaway speed is that one thing, but there are NFL backs that don't have that same speed either. He was fun to watch, that's for sure, because of that tackle breaking ability.