Share All sharing options for: Pioli/Haley/Parcells Connection Continues for the Kansas City Chiefs 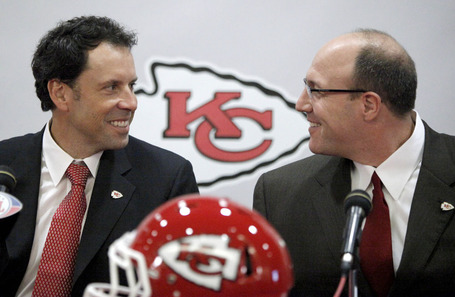 First things first.  If you haven't read Kent Babb's piece on Todd Haley, linked in the FanShots by Zodeman, go read it.  It's a great article that gives us a lot of insight.  Yeah, insight....in June.  Babb did a great job of getting past the press conference-interior of Haley and digs a little deeper into the Bill Parcells connection.

Haley's coaching style, most easily defined as "intense", has rubbed a few the wrong way, mainly Will Franklin who was released after reportedly catching the wrong end of a mini-camp shouting match.  Jon McGraw said he doesn't respond well to being motivated with fear.  Haley does this to his players because he's been in their shoes before, even if it was nearly a decade ago.

Players are watching as the man runs to a fence — coach’s orders. Some of the players are confused that an assistant coach, a young Todd Haley, is in Parcells’ crosshairs this time. Haley made a mistake, and he understood the hard way that there were no excuses and no compassion. He messed up the Jets’ practice schedule, and carelessness has consequences. So Parcells made him run.

That's just scratching the surface.  Free agents brought in (Tony Curtis, Sean Ryan), trades (Matt Cassel, Mike Vrabel) and off the street pick ups (Travis Daniels) have the connection.  After reading Babb's piece, I can tell that the Kansas City Chiefs are now being given the complete Bill Parcells experience.

That's why I wasn't completely surprised to learn that the Chiefs skipped their practice on Friday, instead heading to the bowling alley.  Why was that not surprising?  Because Bill Belichick and the Patriots canceled practice and Eric Mangini (former NE coach) and the Browns did the same thing.  Three coaches, all with the same connections, canceling a practice the same weekend.

This PHP connection doesn't stray too far from it's roots.  Maybe that's why it's so strong.  Because once you're a PHP guy, and you "get it", you know another one of the PHP connections is not too far away and you won't be out of a job long.