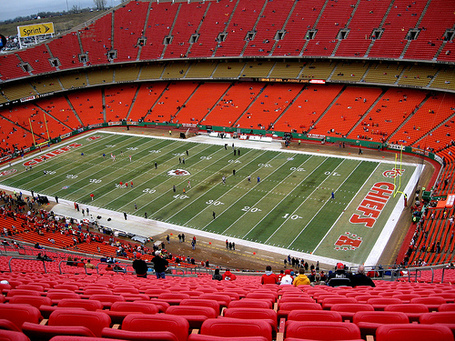 Here are a few updates on the Kansas City Chiefs rookie mini-camp.  They are scheduled to have two practices today and one tomorrow.  The rookies were scheduled to be at the stadium at 12:30 PM yesterday but per head coach Todd Haley's press conference yesterday several players missed a flight or had flights delayed.

33 rookies at this weekend's mini-camp

That's rookies...not one or two year players, but rookies.  Of those 33, eight of them are from the Chiefs 2009 draft class.  Another 12 come from the undrafted free agents signed.

The remaining 13? We're not quite sure. Take a look here where we're tracking the Chiefs UDFAs.  We've included players the team has reportedly shown an interest in.

One of them is Chase Patton, who was scheduled to arrive at Arrowhead yesterday.  He should be in the groove as he spent last weekend at the Chicago Bears rookie mini-camp.  While creating our Chiefs draft interests page, we heard that the Chiefs had asked for a contact number on draft day for Patton (at which point I asked the obligatory 'Chiefs looking for next Cassel?' question).

After this weekend, 4th round pick CB Donald Washington and UDFA LB Corey Smith will not be attending practices until June 11th.  Their universities, Ohio State and Cincinnati respectively, operate on tri-mesters (I think) so their semester isn't over until then.  The NFL and the NCAA have an understanding of sorts with this rule.  The NFL doesn't want to be pulling players out to mandatory mini-camps before they finish the semester.

Apparently the best offseason in decades for the Kansas City Chiefs isn't paying off for the accounting department.  Even with the acquisition of Scott Pioli and the steal of the offseason in quarterback Matt Cassel, I've been told that hasn't generated enough interest in folks to buy tickets.  At least not lots of them.

I know of at least one local business that employs thousands that has been offered season ticket discounts - and I mean discounts.  The way I hear it, they're starting with 35% off.  This is on top of the single game group discounts they've been offering as well.

My guess?  The Chiefs are doing their darnedest to eliminate the ticket inventory via large discounts with local businesses so fans don't think to themselves, "Well at least King Carl could sell out..."  The way I see it, the Chiefs will be pushing these season tickets all the way through the start of the season.  A team that's won six games in two years combined with the worst economic climate since my grandmother was learning how to drive isn't exactly the best fuel for the Chiefs ticket train.

The talk of TV blackouts we heard through the last half of 2008?  Expect those to continue unless the Chiefs start off the season hot.  I know Chiefs spokesman Bob Moore told the Kansas City Star that 100 new season tickets were purchased in the wake of the Cassel signing, but unless we sign 150 more Cassel's, I predict the sell outs (or lack thereof) will be an even bigger problem this season barring a Miami Dolphins-esque turnaround.

A few more words on the Matt Cassel contract situation

You know the story by now.  Michael Lombardi of the NFL Network and the National Football Post report Cassel has a deal done in principle that includes $36 million guaranteed (with the total likely being in the $66 million range) over six years.  Multiple outlets, including Adam Teicher of the Kansas City Star, Peter King of Sports Illustrated, Tom Curran of NBC Sports and GM Scott Pioli deny the report.

I asked Lombardi about it and he said, "My source told me that they had agreed and had to work out some details.  In the spirit of their denial it might take a few more weeks to announce the deal.  But unless my very good source is wrong then I suspect it gets announced in June."

Joe Fortenbaugh of the National Football Post also reported the Cassel signing citing a league source.  Recently, he told Pro Football Talk, "When the announcement is made the matching numbers should clear things up."

Another source close to the situation told PFT, "There have been no Cassel discussions at all — the Chiefs were focused on the draft. . . .  I have no idea where that came from."

At this point it's a matter of who you want to believe.  For my money, I'm sticking with Lombardi.

If, if, if with the Raiders

"We'll see if its year one or year two," Heyward-Bey said. "The thing is if I can stay healthy. If I stay healthy, I will produce."

Day one and Darrius Heyward-Bey is already planting the seeds for his inevitable failure.

As far as a future rivalry with Michael Crabtree, the near-unanimous number one receiver on the board in the draft, Heyward-Bey said, "We're not like Kobe and LeBron yet, comparing our stats.  All I'm worried about is learning this playbook and making this team."

Here's one for you - will Tamba Hali have more sacks than the Raiders have wins?

If I were you, I wouldn't trust Al Davis' employees either

This is interesting to note because Darren McFadden also had offseason surgery (on his shoulder) and he also did so independent of team doctors.

I'm still trying to obtain confirmation that Dr. Nick performed the operations, and not Dr. Hibbert.

Irony of the day from Ed Hochuli

"Seriously, I'm nothing special. The PLAYERS are the special ones."

Says the official hosting a chat on ESPN.com.  And the official who owns NFL85.com.  Seriously, how many of you would see that website and NOT think it's Chad Ochocinco?

Now that I've got my Raiders' kick for the day, here a few links to get you going this morning.

Don't forget to pick up your Mother's Day gifts either.  Ideas and suggestions for gifts are welcome (Can you tell I've been procrastinating?).