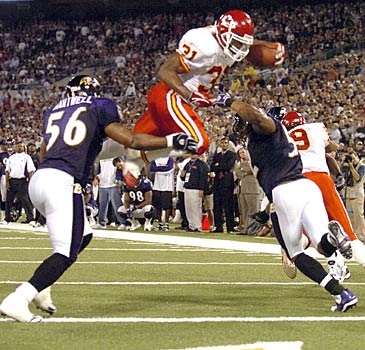 Love him or hate him, Kansas City Chiefs running back Larry Johnson is on the verge of becoming the team's all-time leader in rushing yards.  Standing 432 yards behind Priest Holmes, it's safe to assume that Johnson will become the Chiefs rushing leader in 2009.

That is, if he's on the team.  Below is a list of the Chiefs top five all time rushing leaders.

The life of a running back is usually short.  It constitutes a stretch of 2-3 years of high level play only to drop off as quickly as it came.

From 2001-2003, Holmes amassed 4,590 rushing yards, or 76% of his career rushing yards in his six year tenure with the Chiefs.  He also made three Pro Bowls and three All-Pro teams during that stretch.

Ed Podolak never rushed for more than 749 yards in the NFL.  He made no Pro Bowls and no All-Pro teams.  He's on the career rushing yards list because he played for the team for nine years.

Okoye, Podolak and Haynes are all respected members of the Chiefs all-time greats.  Priest Holmes had his issues in the eyes of the fans but was still beloved as the star of one of the greatest offensive stretches in NFL history.

There's been a lot of LJ talk around here regarding his future with the Chiefs.  Whether you want him to stay or not, it appears that he'll be sitting atop, or near the top, of the Chiefs record books for a long time to come.