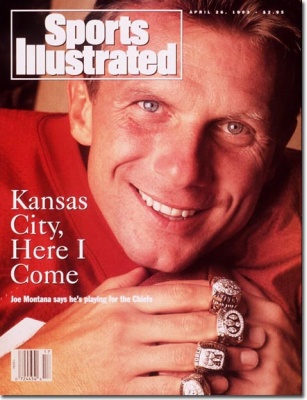 As Bob Gretz mentioned this morning, NFL.com had an article yesterday about the top ten trades of great players for draft picks.

Among the Hershel Walker, O.J. Simpson and Eric Dickerson trades was of course the 1993 trade of QB Joe Montana to the Kansas City Chiefs.

Jason Feller of NFL.com fills us in on the details, in case you don't remember:

49ers side: Filling in for an injured Joe Montana in 1991 and 1992, Steve Young played sensationally. Given Young's stellar play, San Francisco decided to give him the starting job permanently and trade franchise icon Joe Montana, who was recovering from an eblow injury. Young wound up having a Hall of Fame career for the 49ers and they got the 18th overall pick in the 1993 draft for Montana. After trading down twice, they used the pick to get DT Dana Stubblefield, who was the 1997 Defensive Player of the Year.

Chiefs side: In addition to Montana, the Chiefs also picked up veteran S David Whitmore and a third-round pick in 1994 that they used on WR Lake Dawson. Montana led the Chiefs to the AFC Championship Game in 1993 and another playoff appearance in 1994. Dawson and Whitmore were complementary players.

A 37-year old HOF quarterback for a first rounder and a couple of first day picks? No way I make that trade today. The Chiefs knew they were giving away those picks in order to win a Super Bowl but still.

My recollection from sixteen years ago was that Joe Montana was "it." He was the final piece of the Kansas City Chiefs puzzle that would finally put our team over the top and into the Super Bowl.

I had a Joe Montana #19 jersey. I had his first football card as a Chief. Life for a Chiefs fan was good. That excitement didn't last too long though. Montana only played two seasons before retiring. Despite a couple of really great seasons after Cool Joe left, the Chiefs still haven't won a playoff game since the man left. It's been different since the mid-90s and I can't quite put my finger on it. With Joe Montana, we had an undefinable edge. With Steve Bono and Elvis Grbac at the helm of the offense, we hoped the defense would hold it together for the win.

Okay, enough reminiscing. For some reason that's hurting a bit this morning.

Click here for a ton of historical Chiefs games for free, playable online and click over for one of Joe Montana's first interviews as a Chief.

And make sure you vote in the poll below.

Montana interviewed after his second preseason game as a Chief.