A Few Notes on Matt Cassel's Contract with the Chiefs

Share All sharing options for: A Few Notes on Matt Cassel's Contract with the Chiefs 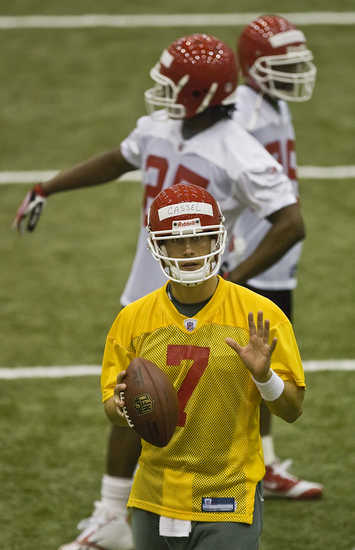 Michael Lombardi of the NFL Network and of the National Football Post reported on April 25th that Matt Cassel and the Kansas City Chiefs had agreed to a long-term contract, in principle, that would pay the quarterback $36 million in guaranteed money over six years.  The timing was curious as it broke about an hour and a half before the start of the NFL draft.

Later that day the report was refuted by multiple sources including Peter King of Sports Illustrated, Matt Cassel (via Tom Curran of NBC Sports), GM Scott Pioli, and Adam Teicher of the Kansas City Star.  The denials were quick and without much comment other than "The deal's not done."

That's not to say a deal still hasn't been reached in principle.  Lombardi first broke the news that the Atlanta Falcons were "seriously considering" making a run at Tony Gonalez and he was the first (as far as I can tell) to report that the Chiefs were "in love" with Tyson Jackson.

We all know how those reports ended up.  So, the report of Cassel's contract was especially intriguing to me considering Lombardi's recent track record with Chiefs' news.  Lombardi was nice enough to answer a few questions I had for him regarding the Cassel contract and the Gonzalez trade.

When do you expect the Chiefs to finalize and announce the Cassel contract?

My source told me that they had agreed and had to work out some details.  In the spirit of their denial it might take a few more weeks to announce the deal.  But unless my very good source is wrong then I suspect it gets announced in June.

If Lombardi's prediction is accurate (and his recent track record is very accurate), then we can expect word on Cassel's deal before the 2009 season starts.

I asked him a few more questions that are after the jump.

I've heard various reports on the Gonzalez trade - Did the Chiefs or Falcons initiate contact?  When you first reported that the Falcons were "seriously considering" trading for Gonzalez, had any talks between the teams occurred at that point?

Yes, they had talks and in spite of their denials, they were talking to all the teams.  But the Falcons seemed to be the team willing to pay a second rounder and as I reported, once a second rounder came on the table, regardless of year, it sealed the deal.  When they denied the talks, it made no sense but that is what they do.  Secrecy is at an all time high in KC right now.


I've heard an interesting rumor on the Jackson pick at #3 and where he was projected as the draft process went on.  The rumor goes that the New England Patriots were enamored with him after the season and into January and wanted to take him at #23 (where he was projected early in the draft process).  Then Josh McDaniels went to the Denver Broncos at which point people started pegging him at #12.  Then Pioli, obviously a former Patriots guy, began to consider him at #3.
Does this sound about right as far as Jackson's rise on the draft boards?  Was it a "former Patriots" thing?  It seemed like they were all interested in him.

I am not sure of the Patriots level of interest in Jackson at any time in the process.

The value of the defensive line far outweighed the value of the a non pass rushing linebacker position-hence the reason for the pick.  Had Curry been a rusher on 3rd down and excelled in that area, then he would have been the pick, but absent the rushing skills, he was not as valuable.

I really believe that had Jason Smith been there, they would have picked him.

However, when picking in the top ten of the draft, you have to draft a position that is never available in the free agent market.  I know they tried to trade down, but they had no takers and the only reason the Browns could pull it off was the Jets had players the Browns wanted.

Lombardi's assertion that talks did indeed occur between the Chiefs and Falcons prior to Pioli's denial is interesting.  He's not breaking any news here by saying secrecy is at an all time high in Kansas City, but it's interesting to note that Pioli flat-out denied that an agreement was in place.  But enough about the Gonzalez trade.  We've covered it ad naeseum around here.