Back in February of last year, over the course of about ten days, I took a look back at the Kansas City Chiefs drafts from 2000 to 2005. I only went to 2005 because I wanted to be fair and stick with that maxim, you can only begin to judge a draft class three years after the fact.

And since we're now three years from the 2006 NFL draft and still in that draft mode (Sort of), let's take a look at it, shall we?

Remember, we're doing this exercise with hindsight in mind. We're not trying to give out grades based on our knowledge at the time.

Click here to check out the previous drafts I've gone back and examined.

P.S. Thanks for your patience as of late. Primetime has school stuff and I'm looking for new employment. Not the most conducive times for blogging. Keep up the great work in the FanPosts and FanShots. 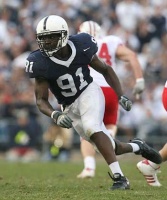 Considered a reach at the time, Tamba Hali has hardly lived up to first round expectations. Even though his tackles have remained steady for the three years he's been in the NFL, Hali's sack numbers have dropped significantly since Jared Allen left for Minnesota.

Right now, Hali has even been lining up at linebacker in the Chiefs' mini-camps. His future as a defensive end is iffy at best. He loses points for not living up to expectations and being unable to perform without a superstar lining up opposite him.

Could have had instead: RB Laurence Maroney, C Nick Mangold, RB Joseph Addai

I think Bernard Pollard gets a bad rap according to many Chiefs fans so I'm going to stick up for him now. I think he's played pretty well. Him and Jarrad Page have held down the safety position for three years running and don't really show any sign of letting up. Pollard has nearly 200 tackles in the last two years. His role will undoubtedly change as the Chiefs move to a combination of the 3-4 and the 4-3 defense but he's been a good pick so far.

Could have had instead: KR Devin Hester, RB Maurice Jones-Drew

Croyle couldn't stay healthy even in high school and for some reason Herm Edwards and the Chiefs thought this guy was our quarterback of the future. I'll admit it - I was a Croyle supporter. Not a fan per se but I said let the man have his chance to see what he can do.

Perpetually injured, Croyle lived up to pretty much what most Chiefs fan said he would live up to - nothing. I give out tough grades for guys who aren't able to shake poor reputations about their play. 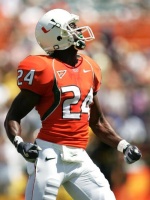 Marcus Maxey stuck around for a year in KC before getting cut. Pretty much an NFL bust however you want to define it. He came in with knowledge of the Chiefs' cover 2 scheme and couldn't hack it at all.

It's tough to give out too harsh a grade on Maxey because he was a fifth round pick but still...the guy has played in one career NFL game. 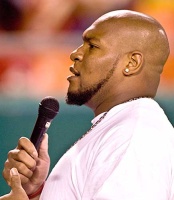 Now we're getting deeper and deeper into the stages of the NFL draft where most players don't work out. Stallings has played in one career game and bounced around from a few practice squads, including the Chiefs' roster twice.

I know everyone dislikes Jeff Webb for being pretty much a nobody but that's what happens to sixth round picks about 90% of the time, no?

Webb is at least still on the roster after three seasons and he's survived the initial Pioli purge. He's shown the occassional flash of talent but then he'll disappear for seasons at a time.

He gets a little grade bump for being drafted so low.

Could have had instead: DB Antoine Bethea 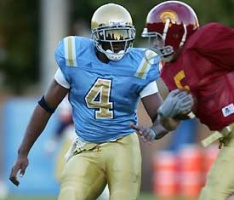 A partial then full two-year starter in the seventh round? 'Nuff said.

This 2006 draft looks pretty dismal in hindsight. Hali looks to be headed nowhere beyond a weak side defensive end/linebacker. Brodie Croyle has dropped to #3 on the depth chart.

But...the Chiefs do have two solid starters in Page and Pollard (Possibly Hali) coming out of this draft. With the way the Chiefs have drafted in the last decade, that's sadly an accomplishment to applaud.

Grade: C (I know, does it get more generic than a C grade?)