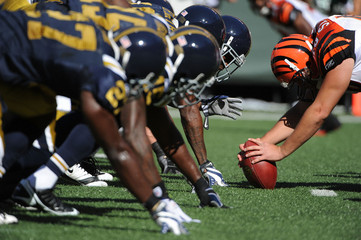 I was out of the "office" on Friday when the Kansas City Chiefs signed former Cincinnati Bengals center Eric Ghiaciuc.  Keeping with the theme of many of the offseason signings, I didn't know anything about the guy.  Just that he was a center with the Bengals and has been a starter for nearly three years.  27 years old with 42 games started at first glance makes Ghiaciuc look like a steal for the Chiefs, right?

Wrong.  At least according to the Bengals fans.  Here's what a few miscellaneous Bengals boards had to say about him.

I'll miss the guy. If getting pushed around and sucking were an art form, this guy would be the greatest artist of our lifetime.

I'd rather sign a beanbag chair for depth than Eric G.

There's always been that cloud over our heads in which the Bengals could eventually sign Eric Ghiaciuc back if they felt neither of the replacing candidates, like Kyle Cook, Dan Santucci, Jonathan Luigs were a strong upgrade. That cloud was dark, gray and thick; a downpour is imminent...

...The cloud evaporates, the sweat off the brow is wiped clean and the anxiety has dissipated.

A surprised Greg can only note that, "watching Eric Ghiaciuc start and play all 16 games for the 2008 Bengals as their center was like watching a garden hose spray water at a screen door. Everything got through."

At least Bengals fans can stop worrying about the possibility that Cincinnati will re-sign Ghiaciuc now. At least until KC wises up.

Good riddance.  WDR is glad that Mike Brown's Bengals won't be able to retain his "services", which included: getting knocked on his ass (earning him the nickname of Inverse Human Pancake Machine), failing to open holes for running backs, and screwing up the center/QB exchange.  Some people call that, "the job of a center."

Uh guys?!?!?!  Shouldn't it tell you something by signing a Bengals cast-off?  What, the Lions didn't have a center you could have taken?

There were plenty of Chiefs fans, led by our own KansasCityShuffle, who did not like the signing one bit and predicted Ghiaciuc is just "camp fodder."  But there was also a section of fans that loved this move.

Excellent move! No reason to complain about this signing. This is just another example of the type of low-key, under the radar free agent that Pioli was always digging up in New England.

Everyone will love this move.

The reason the center position is becoming increasingly important for the Chiefs is because in 2009 they'll play HALF of their games against teams running a 3-4 defense.  This means that a 300+ pound nose tackle (and likely strong as an ox) will be lining up in front of our center this season.

My official take on it is this - Ghiaciuc does have experience, even if it wasn't necessarily a positive one, running against 3-4 defenses (every other team in the AFC North runs it).  Niswanger moved to center last season.  Do I think Ghiaciuc is the answer at center?  Probably not.  But he provides depth at multiple positions.  If he's slotted to play the center position come September, then we've got another body who can play guard (Niswanger).

Taking a line from Herm Edwards, "Competition. It's a good thing."