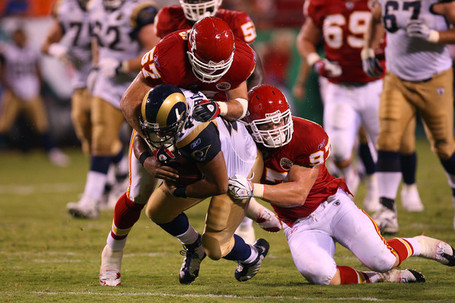 The Kansas City Chiefs have placed linebacker Brian Johnston on waivers according to Bob Gretz. (Here's a good definition of waivers.  For our purposes, waiving means he's been cut.)

Johnston was a seventh round draft pick by GM Carl Peterson in 2008.  He was labeled a 4-3 defensive end when drafted, but was forced to outside linebacker in Todd Haley's 3-4 scheme.

Since Johnston is not a four year veteran, he will enter waivers.  As Gretz points out, don't be surprised if the Detroit Lions make a claim on him.  They're first in line and new defensive coordinator Gunther Cunningham comes from the Chiefs.

His career totals include three tackles on defense and one on special teams.  His season ended on November 12th when he was placed on injured reserve for a calf injury.

As excited as we were for the Chiefs 12 man 2008 draft class, only eight remain.  Joining Johnston in the Pioli purge is KR Kevin Robinson, TE Michael Merritt and WR Will Franklin.