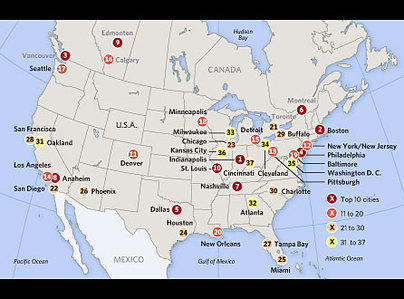 Where did Kansas City land? 36th, or second to last.

The ranking is based off winning percentages since 2000. Extra points were given for making the playoffs and winning a championship. The Chiefs have made the playoffs twice in that span ('03 and '06) while the Royals have gone 0 for 9 in playoff bids.

Since 1985, there have been THREE playoff victories by Kansas City professional sports teams. I'm tempted to bring up the Blades as a semi-pro team to inflate these stats (that sweet, sweet 1992 Turner Cup Championship).

Geez...we can talk about the history of our teams because that's about all we've got. Since 1972, there has been ONE world championship by Kansas City professional teams.

Let's not forget this post where Kansas City was ranked as the 5th least popular city.

H/T to Stampede Blue for the link. (And now I will take back my hat tip because the Colts beating the Chiefs in the '03 and '06 playoffs are part of the reason we're so low on the list.)