The Greatest Kansas City Chiefs, By the Numbers: #3

Share All sharing options for: The Greatest Kansas City Chiefs, By the Numbers: #3 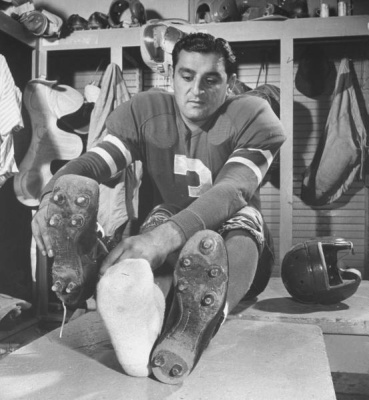 But before you dismiss Mr. Aganjanian, let me give you his nickname - The Toeless Wonder. He has quite the interesting story in case you haven't heard it before.

Here's a couple of notes on him from his Wiki page:

Benjamin James Agajanian "The Toeless Wonder" (born August 28, 1919 in Santa Ana, California) is an Armenian-American and a former collegiate and Professional Football player. A placekicker, he played college football at the University of New Mexico, and played professionally in the American Football League for the Los Angeles/San Diego Chargers in 1960, 1961, and 1964. He also played for the Dallas Texans in 1961 and the Oakland Raiders in 1962. He was one of only two players (the other was Hardy Brown) who played in the All-America Football Conference, the American Football League, and the National Football League.

Agajanian had four toes of his kicking foot crushed off in a work accident during college, but overcame the injury to become pro football's first kicking specialist, booting field goals for 14 different professional teams in the 1940s, 1950s and 1960s, including the 1956 World Champion New York Giants. After retiring from the field, he was the Dallas Cowboys kicking coach for 20 years.

Ben was a football player of some local repute who went from Compton Junior College to the University of New Mexico, then had what would have been to most a career-ending injury. He was at a summer job and had the toes on his right foot crushed so badly in an elevator accident that he had to have them amputated.

Ben wrote the New Mexico coach a letter and said he wanted to come back, try to keep playing the defensive line, but mainly continue as a kicker.

"Didn't hear a thing," he says, "so when it was time for practice to start, I got in my car, drove to Albuquerque, walked into the middle of a coaches' meeting, sat down and waited for them to finish. After a while, the coach looks up and says, 'What are you sitting there for? Go get your uniform on.'"

So yes, I know that Jan Stenerud is a Hall of Fame kicker, on the Chiefs' lone Super Bowl winning team. But you have to give Ben Aganjanian some credit for sure. He was the first place kicking specialist, paving the way for Stenerud's Hall of Fame career. Plus, the guy destroyed his kicking foot. For some reason, I don't think toughness like that exists in the NFL today.

And not to gloss over Mr. Jan Stenerud, because he should run away with this vote. Here are some of his accomplishments:

Have at it this morning. I'm moving out of my apartment today to an incredible new spot right by Town Lake in Austin, TX. I'm completely jazzed about it. We're going to be within walking distance of the lake, Barton Springs (a natural spring pool), Zilker park (hiking and such) and about a dozen restaurants and bars.

Who says you can't move forward without a job?