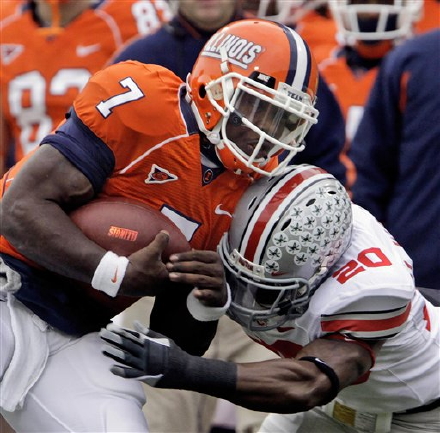 While we all hold different early opinions on the Kansas City Chiefs recent draft haul, I think all can agree it's a mysterious cast of characters. Some believe the players hold great promise while others question various picks and whether we should have went other directions. Yet one player who divides the most landed right in the middle of the Chiefs draftees - Donald Washington.

As an early starter at Ohio State, the cornerback came out a year early in this year's draft to mixed grades. Some felt he should stay in school to raise his draft stock, experience and work on his game. Others believe his fantastic combine results (especially vertical jump) show a higher potential at the NFL than the college game and that Washington is prime sleeper material. It's a coin toss that will find no real answer for several months.

So instead of the constant conjecture we find here at Arrowhead Pride, we thought we would go straight to a source that just might know a thing or two about Washington's play. Doug Lesmerises is the beat writer for all things Ohio State for the Cleveland Plain Dealer, Ohio's largest newspaper, and Cleveland.com. Doug's years of covering the Big Ten powerhouse provided prime insight for us as we asked him a few questions concerning the newest Chiefs cornerback.

AP: Before the draft, where did you think Donald Washington would be slotted?

Doug Lesmerises: After his performance at the combine, particularly the athleticism he showed with his vertical jump, I thought he had a chance to go as high as the third round. When he first decided to come out with a year of eligibility remaining, I don't think most people who followed the Buckeyes thought of him that highly, but I don't think we ever got to see or appreciate the full range of his skills at Ohio State.

As a sophomore, he was just the starter opposite Malcolm Jenkins - good player, but I don't know that he really defined himself. Then he was suspended for the first two games of his junior year and wound up sharing that starting spot the rest of the year with Chimdi Chekwa and still never showed everything he could be. I think he'll be one of those players OSU fans appreciate more once he's gone - and they realize the next corners in line aren't quite as good as Washington.

AP: In regards to his pro game, what are you seeing as the greatest assets he brings to the Chiefs?

Lesmerises: I think he's got the package - size, speed and I don't think he's afraid to tackle somebody. I don't know that he's a No. 1 corner, but I think he profiles, at his top side, as a more than solid starter capable of hanging with most NFL receivers.

AP: What about weaknesses - what are the areas Donald needs to immediately focus on in the transition to the pro game?

Lesmerises: I think he has to work on being his best. I wouldn't call him an underachiever by any stretch, but as I already said, I don't think we saw his best. Part of that was two situations - one where it looked like he would be suspended for the 2008 national title game against LSU because of a team violation, and then wasn't, and then another when he was suspended for the first two games of 2008.

I don't think he's a bad guy, and he made it clear before the draft that he was putting those incidents behind him and any team could have faith in him. But he has to make sure he makes the right decisions that allow him to max out his talent. If he can handle that, and I don't think that's easy for any NFL rookie, the rest of the transition should be fine.

AP: Finally, what expectations do you hold for Donald at the next level?

Lesmerises: I know OSU linebacker James Laurinaitis, who was speaking as a teammate and good friend of Donald's, felt Washington was a sleeper who would be a steal for some team in the draft. His agent has already made the comparison to Asante Samuel - previously drafted in the fourth round by Scott Pioli in New England, but that that might be shooting a little high.

But I would think that within the next three years, Washington will be a starting corner and I expect him to have a solid, lengthy NFL career. If off the field issues trip him up, I'd be surprised, but we can't ignore the past, either.