Checking out the Reasons for Mike Vrabel's Absence from Chiefs Camp

Share All sharing options for: Checking out the Reasons for Mike Vrabel's Absence from Chiefs Camp 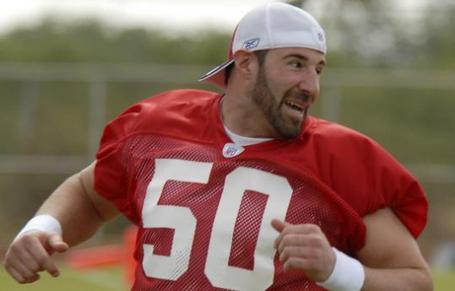 The commencement of the Kansas City Chiefs voluntary practices has started not without slight controversy.  Brian Waters, who is absent reportedly due to a tiff with head coach Todd Haley, and Mike Vrabel have been absent from offseason activities.  The practices have been voluntary so technically this shouldn't be an issue.

But the word "voluntary" is used lightly in this case as all NFL coaches expect all players to be there, whether they can punish them or not (they can't in this case).

Since we know the reasons for Waters' absence, let's take a look at a few of the possible reasons for Vrabel's absence.

According to NFLPA records, he is entering the final year of a five year deal signed in 2005.  The deal included a $5 million signing bonus and a $2.2 million base salary this season.  Translation: he's costing us $2.2 million in cap dollars (the Patriots take the hit on his signing bonus pro-ration).

He's entering the final year of his deal, which is the reason some might opine that money is the reason he's not attending the OTAs.

This is the largest base salary in his original five year deal so I would reject the notion that his absence is money related.  Of course, everyone wants more money, but Vrabel didn't exactly seem excited to be here in his initial press conference so my guess would be that he'd opt to hit the open market sooner rather than later.

Maybe Vrabel isn't showing up because he's 34 years old and has been in the league for 12 years.  He's a veteran 3-4 linebacker having been coached under two of the better systems in recent memory in Pittsburgh and New England.  It's not like he doesn't know what he's doing.

He missed three games in eight years in a Patriot uniform so I don't think the conditioning argument is strong.

If Vrabel is choosing to slowly transition his move to Kansas City, then missing voluntary OTAs is part of it.  I think we forget that these are people, as well, and that being uprooted from your home for the last eight years doesn't come without its bumps.

In theory, these offseason activities are voluntary so Vrabel shouldn't have to be there.  In reality, coaches expect all players to be there.  They can't fine or otherwise punish players for missing the voluntary portions of the offseason, according to the current collective bargaining agreement.

Of course, those are just words in a legal document.  Players are routinely dragged through the mud in the media for missing practices.

While I would prefer Vrabel to be present, I'm not putting much thought into his reasons for missing.  Nor do I really care that much.  He's been around the block and understands what it's like to be a "true professional", as Scott Pioli and Todd Haley have said on a number of occasions.

The only advantage to be gained by him being there would be to place him in a mentor-type role with the defensive ends transitioning to outside linebacker.  But, at the end of the day, the coaches can handle that.  That's why they're there.

I'm not putting much stock into the questions of dedication some folks are asking of Vrabel.  He's a professional and he'll show up when the time comes.