The Greatest Kansas City Chiefs, By the Numbers: #2

Share All sharing options for: The Greatest Kansas City Chiefs, By the Numbers: #2

Understandably, most of these #2s are kickers. Here are the NFL jersey number assignments by position, which have been in affect since 1973:

Let's check out these guys individually. And if you have to ask who the blocked out player is...don't. 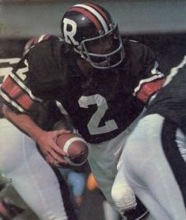 Clements has actually two different employment stints with the Kansas City Chiefs. After playing for the Chiefs for one season in 1980 which was in between a long football career in the CFL, Clements came back to coach the Chiefs' QBs in 2000. Under his tutelage, Elvis Grbac reached the Pro Bowl.

The Chiefs' head coach in 1980 was Marv Levy, who knew of Clements from his own time coaching in the CFL. Tom Clements was 7/12 for 77 yards passing in his one game career with the Chiefs. 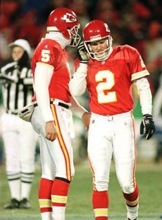 Not going to talk about this guy. 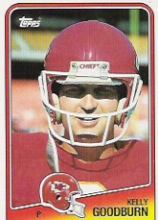 Goodburn was the Kansas City Chiefs punter during the late 1980s/early 1990s transition period. Marty Schottenheimer came to KC in 1990 after two four win seasons in a row. The rest...is history.

There isn't a lot to say about Kelly Goodburn other than he was a solid punter for four seasons in Kansas City. Here's a bit more info:

Kelly Goodburn grew up in Iowa and attended Iowa State University where he played football for four years (including one Redshirt year). His last year of college was spent at Emporia State where he played for one season. He joined the Chiefs in 1987 as a Free Agent and won the job as the teams punter in 1988. In 1989, Kelly enjoyed his best year during his tenure with the Chiefs. His 25 punts inside the 20 were the third most in the NFL, while his ratio of one inside the 20 every 2.7 punts as tops in the league. Kelly tied a club record with 11 punts in a single game.

Punters. So exciting, no?

Does anyone else think of like three people when they hear the name Eddie Murray?

Kansas City was one of eight different NFL teams that Murray played for in his long career. He made his one and only field goal attempt of 1992 while kicking in place of Nick Lowery. 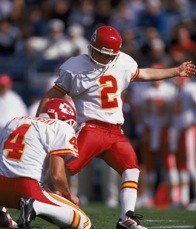 In 1990, left the U.S. Naval Academy to pursue an NFL kicking career. In 27 games over two seasons in Kansas City, Peterson completed about 76% of his field goals.

Peterson retired in 2005 after stints with the Steelers, 49ers and Falcons.

Who is the greatest Kansas City Chief to wear #2?