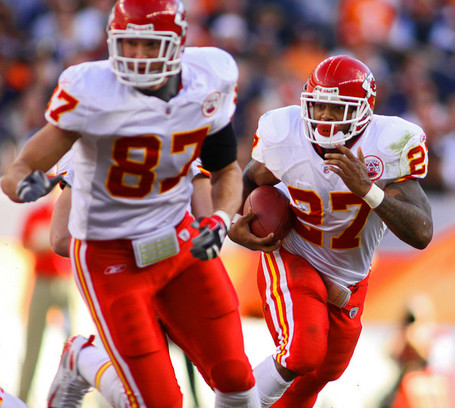 Brad Cottam caught 21 passes at the University of Tennessee

Other than quarterback, the tight end position may be the most intriguing story entering the Kansas City Chiefs 2009 season.  All-everything Tony Gonzalez is off to Atlanta while second year tight end out of Tennessee  Brad Cottam is left to replace him.

The word "replace" may be a little unfair, since Cottam isn't expected to put up the wide receiver like numbers Gonzalez did.

"I already know I’m not going to have 100 catches like Tony would get every season," Cottam told the Kansas City Star. "I’m a completely different player than he is."

What are the expectations of Cottam this season?

If we're going to use Todd Haley's recent season in Arizona as any indication, Cottam won't be an integral part of the offense.  Although Chan Gailey was retained as offensive coordinator, the new head coach's influence will show, especially in the passing game considering his background.  Of course, Haley was the offensive coordinator of a Cardinals' team that featured three 1,000 yard receivers.  A long way off is the Chiefs current receiver core with one 1,000 yard receiver in Dwayne Bowe.

But it's not like the Cardinals even looked at the tight end the last two years according to Bill Williamson of ESPN.com.

In the past two years under Haley, Arizona attempted 84 passes, completed 62 passes and accounted for 594 yards to the tight end. All three were the lowest in the NFL over the two-season span.

Last year, Ben Patrick led all Arizona tight ends with 11 receptions for 104 yards.  Gonzalez, on the other hand, racked up 1,058 yards on 96 receptions.

My over/under question to you is this:  Will Cottam be more like Ben Patrick or Tony Gonzalez?  That is, will he be over or under 581 yards, or equal distance between Patrick (104 yards) and Gonzalez (1058 yards)?