The Greatest Kansas City Chiefs, By the Numbers: #1

Share All sharing options for: The Greatest Kansas City Chiefs, By the Numbers: #1

Check out the jersey number list at the mothership. We'll be counting these down throughout the off season.

The Kansas City Chiefs to wear the red and gold #1 into battle haven't performed very illustriously while in the City of Fountains. Outside of KC, a couple of these guys have had notable careers.

MIke Adamle's two seasons in Kansas City didn't amount to much. He rushed the ball 86 times for 346 yards before moving on to New York Jets and eventually the Chicago Bears to complete his NFL career. You probably remember Adamle best from his stint as the co-host of American Gladiators. He is currently a sports anchor in Chicago, after numerous sideline reporting jobs in a number of avenues, including professional wrestling. 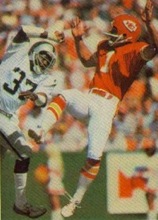 A late round pick out of Duke in 1979, punter Bob Grupp had three seasons in KC, garnering a Pro Bowl award during his first season. He averaged 43.6 yards a kick that year, including a career long 74 yard punt. Grupp left KC a free agent after the '82 season. 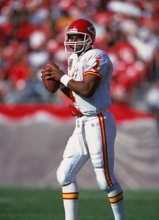 After a stint in the CFL to start his career, Warren Moon settled in for some nice years in Houston before bouncing around to Minnesota, Seattle and finally Kansas City before retiring. Moon only made 37 pass attempts in three games before ending his time as a backup in KC.

Durwood Pennington? There isn't a whole lot out there on the guy. He played one season with the Chiefs, barely registering any statistics.

During his three seasons with the Chiefs, kick returner Noland Smith would have had quite the highlight reel. In his first season, he returned 56 kicks including one kick for a 106 yard TD return, the longest in Kansas City Chiefs history. Smith led the AFL in kick return yards that season. Smith currently ranks 18th on the NFL's all-time kick return average list with 26.06 yards per return. He also goes by the nickname "Super Gnat."

Matt Stevens is what the union world would call a "scab", having played for the Kansas City Chiefs during the 1987 strike year. Stevens played at UCLA before that and didn't play NFL football beyond that one season with the Chiefs. Even in KC he didn't play much - only two starts and three games played in for his career.

Lawrence Tynes is a guy who's success came after leaving Kansas City. Originally signed by the Chiefs as an undrafted free agent in 2001, Tynes played in the CFL for a couple of years before making his way back to KC to replace Morten Anderson in 2004. He made nearly 80% of his attempts while a Chief and went on to kick the game winning field goal in overtime in the 2007 NFC Championship game to send the New York Giants to the Super Bowl.

Have at it this morning. Who is the greatest Chief to wear #1?