With more and more talk of the 3-4 being our "base" defense, and us running "variations" of the 3-4, I did a little more scavenging, and watched a little more tape from last year.  What I saw didn't exactly get my hopes up for a 3-4 lineup.  So, without further ado, I present a positional breakdown of the 3-4, where our guys fit, and my case against the full switch. 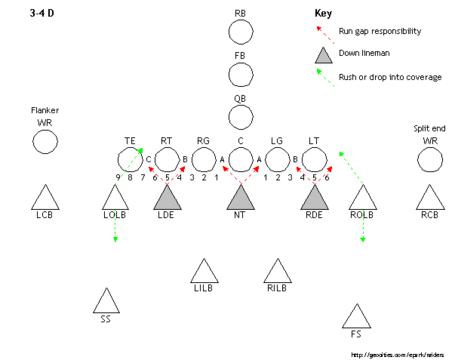 "There will be a transition," Capers said. "How fast you transition into a true 3-4 is based on your personnel and how well they adapt to the things you ask them to do. You've got to be flexible enough to keep some 4-3 elements but also keep enough flexibility to feature your best football players."

The switch can be done, yes.  I also believe we'll end up in the 3-4 full time within the next 2-3 years.  However, as Dom Capers says above, there's got to be some pieces in place to make this switch happen.  Too often (on both sides of the ball) people forget the distinct differences in scheme switches.  It's not just having Tamba step back into an OLB that creates this defense.  There are matchups and gaps that have to be addressed, and it's a completely different philosophy outside of "stop the run, rush the passer".

Now, before I start, let me go over some of the advantages of switching to the 3-4, for those who may not know.

2.  At any given time, there are 5 men on the line of scrimmage that can rush the passer.

3.  Until the ball is snapped, the offense only knows where three of the five men on the line of scrimmage will be .  This makes it harder to determine blocking assignments pre-snap, and harder on the QB to audible.

Keep these in mind as I dissect the positions.

First off is your Nose Tackle.  He is responsible for both "A" gaps, and is lined up in the zero technique.  His one and only job is to plug the center of the line and make sure nobody can get through.  This is the heart of the defense.  If the NT cannot hold his ground, the offense will run roughshod over the center of a 3-4 defense.  Tank is a strong player, and he's got the size to play NT.  However, we're talking about a guy who had trouble holding down ONE gap last year.  A different mindset may change that.  Knowing he doesn't have to get penetration, as long as that trench is his, may allow him to play more to his strengths.  Tank Tyler - NT, 3-4 Acceptable Fit

Next up: 3-4 DE's.  They line up in the 5-technique, and are responsible for the "B" and "C" gaps on their respective sides.  These are the guys typically listed as DT/DE 'tweeners.  Their number one job is to stuff the run and eat up blockers the LB's typically would have had to shed.  Tyson Jackson is this kind of player, and is a good fit.  On the other side, Magee might be the answer, but that places Glenn Dorsey as a "depth" player.  I don't think the coaches would want to do that, but Dorsey presents one of the bigger problems in this defense.  As we saw last year, he struggled with lining up over the offensive guard.  This defense would have him lining up opposite a better, potentially bigger, more agile offensive tackle.  His arm length will be much shorter than that of most tackles, so his ability to get into the gap will be impeded by someone whose arms can get there first.  I know it's been beaten to death, but I just don't see Dorsey fitting this defense.  Tyson Jackson - DE, 3-4 Perfect Fit  Alex Magee - DE, 3-4 Acceptable Fit  Glenn Dorsey - DE, 3-4 Poor Fit

On to the 3-4 ILB's.  These guys are run stoppers, and mid-range pass coverage.  The running game depends completely on the ability of the 3 DL to contain the run and tie up blockers.  As there are 5 offensive linemen (not including TE), if the DL doesn't hold blocks well, there are 2+ offensive linemen bearing down on LB's.  Thus, the ILB's must be able to shed blocks effectively on players much larger than they are.  Check out a quote from Ray Lewis from a couple years back:

"We're in the 46 defense now, and finally, finally again, I get to play football.  My job is not to take on offensive linemen, but to make running backs not want to play against me"

It's an all-too-telling quote from one of the toughest guys in the sport:  playing 3-4 ILB is rough.  I believe we've got a tough as nails guy in Zach Thomas, who may have seen better days, but is still capable of making this a better team.  However, slotting in DJ as the other ILB?  Shedding blocks is not his forte, but we're currently lacking a better option.  He's good in pass coverage, but having a guard plow him over every play is not going to get the best production out of him.  Zach Thomas - ILB, 3-4 Good Fit  Derrick Johnson - ILB, 3-4 Poor Fit

Finally, the 3-4 OLB's.  These guys are the athletes, the pass rushers, and the glory-mongers of this defense.  They must be able to get the the Quarterback, and they must be able to drop into pass coverage.  This area is of special concern for this team after last year.  We desperately needed someone who could come in and make a big difference.  We picked up Vrabel.  Playing on the outside in 2007, Mike picked up a hefty 12.5 sacks.  That's big production and will improve this team next year.  However, the other spot seems to be up for grabs.  There are several players trying out for the position, but the consensus seems to be Tamba Hali.  Tamba is not a good pass coverage option, and there's so much to think about.  From former Bengals DE/OLB David Pollack:

"The biggest thing is when you play defensive end, you don't have to think.  You line up, you have an assignment and you do that assignment regardless.  When you move to linebacker, your assignment is predicated on formations. You have to know when it's Cover 2, if they run at me, what to do or what my responsibilities are if you see action away from you. There's a lot more thinking, so it can really slow you down. What killed me is I would have everything right and then a guy would go in motion, and that changed what I was supposed to do.  When you are (at 4-3) end and you're an effective pass rusher, you can get in a rhythm. You can figure out what the guy across from you likes to do when he run blocks or how you can beat a guy when he backs up to pass block. It's different when you play with your hand off the ground."

That screams adaptability to me.  Tamba was not rated highly as an OLB coming out of college.  Many just didn't think he had the skillset or speed to transition to a 3-4.  Currently, he's a decent secondary option at DE, and as the quote says, that's just getting into a rhythm and playing your man for 4 quarters.  An OLB changes from play to play.  Half of the job is pass coverage, and the other half is pass rush.  Unfortunately, Tamba's terrible at one, and mediocre at another.  Mike Vrabel - OLB, 3-4 Perfect Fit  Tamba Hali - OLB, 3-4 Poor Fit

Now, there's no hard and fast rule to all of this, mind you.  Players develop, and skillsets are found.  New coaches may milk some more skill/effort/talent out of these guys.  But, you look at this lineup see the strong side as being really strong...but our weak side being really weak.  If I were an opposing offense, I'd run at that side of the line all day, and roll my QB to the weakside during passing plays.

You play the scheme that fits your players.  Like I said, we will eventually run the 3-4 exclusively.  I truly believe that.  When that happens, we may very well not have any of the young players on the weakside of our front seven on the team.  There are other schemes (gone over and referenced at length) that fit those three players better, and don't sacrifice the talents/skills of the other players.  If we're making the full switch, let's get what we can from them in a different scheme this year, really show the league that they can play, then try to trade them away for draft picks/players that fit the 3-4.  As it is, I just struggle to see how we can let three 1st round picks potentially waste away in an unfit scheme.