The Kansas City Chiefs had the Fifth Best Attendance in 2008

Share All sharing options for: The Kansas City Chiefs had the Fifth Best Attendance in 2008 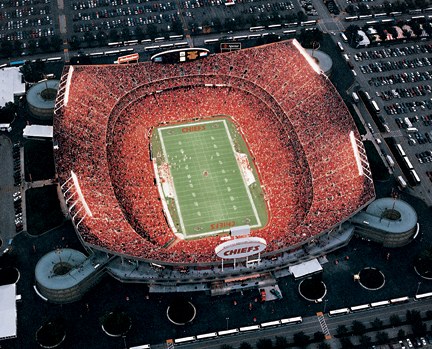 The Kansas City Chiefs currently have the 3rd largest stadium in the NFL in terms of capacity.  They used that to their advantage in 2008 - at least when it came to selling tickets.

Attendance as measured by tickets sold is a whole lot different than actual clicks through the turnstiles.  If you went to a game at Arrowhead in 2008, you know how barren the stadium was at times.

Arrowhead Stadium has a capacity of 79,451 which left about 5,000 tickets per game unsold in 2008.  This represents a 3.5% dropoff from the 2007 attendance figures. The Chiefs had about 2,700 more people attend each game in the previous year.

Rest of the NFL

*The Washington Redskins were #1 in attendance - as they should be considering they have the largest stadium in the NFL.

*The Indianapolis Colts were the leader in attendance from a percentage standpoint (106.4%).  The Colts also had the largest percentage jump from 2007 with a 15.8% increase.  This number is slightly skewed considering they moved into a new stadium in 2008.

*The Detroit Lions had the largest percentage dropoff from '07-'08, which is no surprise considering the winless season.

My question to you is, when will this 2005 quote from Sports Illustrated become relevant again:

"When the Chiefs are having a bad season, they're tough to beat at Arrowhead. When they're having a good season, they're unbeatable. With the scent of barbecue in the air and a sea of red in the stands, Kansas City is the best football atmosphere in the country."  (Sports Illustrated - Arrowhead Stadium toughest place to play)