Share All sharing options for: Chiefs Special Teams Still a Work in Progress 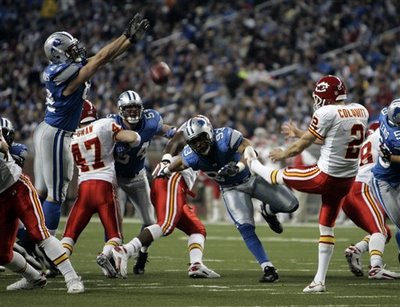 The Eddie Drummond/B.J. Sams/Kevin Robinson experiments never panned out so the Chiefs picked up WR/returner Quinten Lawrence in the 6th round. He's been returning kicks and punts in mini-camp and figures to compete with Dantrell Savage for the job.  Donald Washington, the Chiefs' 4th round cornerback, also figures to contribute to the return game.

Todd Haley has been stressing the importance of a return game:

"That’s a great opportunity for somebody. That’s definitely an area we went into the draft and the offseason knowing we needed to find somebody."

Knowing it was an area of weakness heading into the offseason may not bode well for incumbent return man Savage.  Lawrence is an intriguing option at returner even though Haley says he "has a long way to go."  His senior season was shortened by injury so he returned only ONE punt.  Of course, it went 70 yards for a touchdown.

He'll be working in part with Steve Hoffman the Chiefs new special teams coach.  Hoffman, if you'll remember, has been in the NFL since 1989 largely as a kicking/special teams assistant coach.

Take a look at the top remaining free agents with a Haley/Pioli/Parcells connection.  A lot of the guys on this list would be special teams contributors.  That's usually what you'll see in players picked up in the final wave of free agency.

I did a much more detailed post on the Chiefs special teams woes in 2008.  Check it out here.  58% of you blamed former coach Mike Priefer (Your welcome, Denver) the most for the Chiefs' issues.  Since that post in February, here's who the Chiefs have added:

The addition of Monty Beisel is important.  My theory on the atrocity of the Chiefs coverage team last year was that it included a large amount of rookies, who probably didn't contribute much to special teams in college, with little veteran influence.  Most of the rookies drafted were skill players that didn't have to play special teams (since it's considered largely a rookie, or young man's job, to earn your way into the NFL).  I think a player like Monty Beisel will go a long way to helping them out.