Chiefs Would be Wise to Note Volunteer Success

Share All sharing options for: Chiefs Would be Wise to Note Volunteer Success 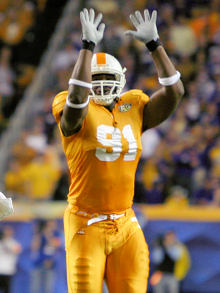 Nonetheless, it was interesting to note that Texas (and to a lesser degree USC) hasn't had the talent come out in the first round that you might expect considering their track record in the college game.

Today we'll turn this in a different direction and look at the outstanding pedigree of first round picks from the University of Tennessee in the last decade.

Of all the players that we can accurately judge, Marcus Nash is the only legitimate bust.  Terry Fair wasn't a star by any means, but he was still a four year starter.

Compared to the first round classes of Texas and USC, Tennessee has an outstanding record for producing talent.  And it's not just talent, we're talking about a few bona fide superstars like Albert Haynesworth and Peyton Manning.

The NFL Draft isn't a science and the school from which a player comes doesn't necessarily factor into a team's decision to draft him, but it's interesting to note that Tennessee is among the best in the country producing top talent.

This year's only first round candidate for Tennessee is defensive end Robert Ayers.  He fell to the Chiefs' Patriots' second round pick (#34) in the Arrowhead Pride Community Mock Draft.

Tennessee's past history with first rounders isn't any sort of indication Ayers will be a solid pro but it's nice company to be in.  In addition to that, as a former Volunteer herself, Ms. Arrowhead Pride fully endorses Robert Ayers.  What more does he need?