Share All sharing options for: Digging Around More in the Draft Day Mind of Scott Pioli and the Kansas City Chiefs 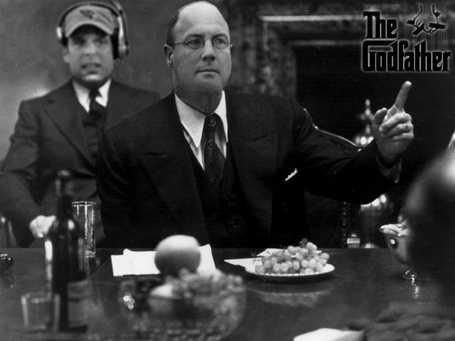 Trying to guess what players teams will draft at the end of April is at best a complete spin of the roulette wheel. That's why all of these mock drafts (ours included) are best used as information conduits about top prospects rather than a specific, pick by pick plan. That's why we're talking about draft trends today, AP readers.

As the vast majority of you already knew, Kansas City Chiefs GM Scott Pioli spent 2001 to 2008 in charge of the New England Patriots personnel department. During that time, in case you can't recall, the Patriots were pretty gosh darn good then. Super Bowls and stuff. Pro Bowls even...

As the person in charge of pro personnel, Scott Pioli was heavily involved in the NFL draft. I know Bill Belichick and others were big players in the Patriots draft war room but for now, we're going to try to draw some draft day conclusions about what Scott Pioli may do based on those Patriots' drafts from '01 to '08. More specifically, since this year's draft talk seems to center more on positions than marquee players, let's look at how Scott Pioli drafted by position while he was in New England. Yes, I'm sure this has been done before on AP. But since you're already here, buy the ticket, take the ride.

A couple things we can immediately glean from this. First, Pioli isn't likely to chase after too many running backs. Aside from the BPA pick of Laurence Maroney in the first round of the 2006 draft, Pioli hasn't spent higher than a fourth round pick on a running back. It's clear the Patriots were ahead of the league in the running back by committee trend we're seeing now and that Pioli puts less emphasis on the position.

One really interesting stat to me is the six tight ends drafted, with two of those picks coming in the first round. Seems a bit contrary to normal football strategy, no? Is this another indicator that best player available is the draft day mantra in Pioli's head? Perhaps.

Pioli is all over the draft map with his offensive linemen picks. The highest pick was spent on the offensive line was a guard in 2005 (32nd pick of that draft). After that, Pioli picked tackles and guards throughout the draft.

One more interesting aspect of the Pioli Patriot drafts is that half of the six wide receivers taken were drafted in the second round.Two of those players, Chad Jackson and Bethel Johnson, were pretty much busts. The other second round pick, Deion Branch, had productive years in New England and then the Patriots did what they do best and parlayed Branch into a first round pick from the Seahawks.

Okay,  on to the defensive picks.

Right off the bat I'll mention that Scott Pioli didn't mess around when it comes to defensive ends for the Patriots 3-4 defense. Two of those five DE picks were in the first round and one more was in the second round. On top of that, the one nose tackle pick Vince Wilfork, was also chosen in the first round.

Other than the high priority on defensive ends, there realy isn't anything earth shattering here. Pioli has spread his picks fairly evenly across the positions requiring the most depth and players.

After the jump, I've listed all of the New England Patriots' draft picks from 2001 to 2008 so you can take a look at them for yourself.

Anything jump out at you?