Share All sharing options for: Rey Maualuga Visiting with the Chiefs Thursday 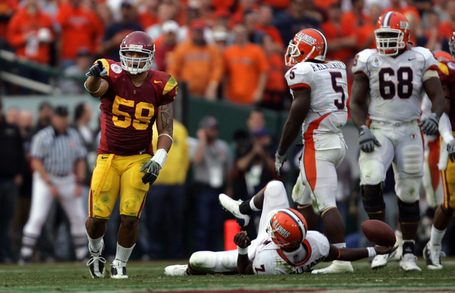 Since we started tracking all of the Kansas City Chiefs draft interests several weeks ago, the name of one high-end prospect has been curiously missing.

That's not the case anymore as USC linebacker Rey Maualuga will be visiting with the Chiefs in Kansas City on Thursday according to Pro Football Talk.

Before the switch (or more accurately eventual switch) to the 3-4 defense, Maualuga was widely speculated as a possibility for the Chiefs with the third overall pick.  A scheme change that emphasized outside linebackers and a so-so Combine dropped all of that talk.

Registering a 4.91 40 yard dash and 23 reps on the bench press didn't wow many folks at the Combine, which is unfortunate for Maualuga.  The buzz on him is that he's not a Combine-type guy.  You're not looking for numbers without the pads on.

Pat Kirwan said it best on NFL Sirius Satellite Radio earlier this week, "Put the pads on then come talk to me about Combine numbers."

At 6'2", 249 pounds, he has what Mocking the Draft calls a prototypical NFL body.

Plays with a lot of passion and is as intense of a player as there is in the entire nation. Never quits on a play. Always work hard to get to the ball. Makes audible calls for the front seven. Prototypical size for the position. Has an NFL body.

More Preparation for a Trade Down?

Most draft prognosticators have been slotting Maualuga at the bottom half of the top ten at best.  The Broncos would be an obvious candidate for his services with the 12th overall pick but before that there's no team that jumps out at me in regards to making a run at him.

A question I want to pose to ya'll is whether Maualuga is a legitimate possibility with the third pick or if this is the Chiefs practicing their due diligence in the instance my opine the other day about the Chiefs not doing draft day business with the Broncos turns out to be wrong and he's available with the 12th overall pick.

I don't see the Chiefs snagging him with the third pick.  But if we're able to trade down into the early teens....boy, what an excellent pick up he would be for the 31st ranked defense.

More on Rey Maualuga around AP:

Chiefs talk to Maualuga at the Combine

H/T WesternChief in the FanPosts