Chiefs Continue to Look at Second Round Draft Prospects

Share All sharing options for: Chiefs Continue to Look at Second Round Draft Prospects 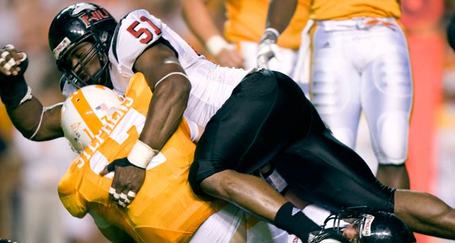 The Kansas City Chiefs don't currently own a second round draft pick having sent the 34th overall selection to the New England Patriots in the trade for Matt Cassel and Mike Vrabel.  But they're sure acting like they've still got that second round pick.

The Chiefs will conduct a private workout in Kansas City with Northern Illinois linebacker Larry English according to Albert Breer of The Sporting News.

One of the best pass-rushers in the draft, English has already visited the Broncos, and will go to Dallas and Kansas City next week. The Broncos and Chiefs are expected to move to 3-4 defenses this year. The Falcons have also hosted English, and the Rams will next week.

The common theme above is the 3-4 defense as most teams are viewing him as an ideal rushbacker in a 3-4 scheme.

Mocking the Draft is impressed with his ability to get to the quarterback but says he doesn't have the versatility (thanks, Kris Wilson) in other aspects of the game.

English’s stats (32.5 career sacks and 57 tackles for a loss) make him an extremely intriguing pass rush prospect. He has good straight-line speed and a knack for getting to quarterbacks. However, he seems somewhat like a one-trick pony. He doesn’t play the run especially well and has little experience in pass coverage. As a senior, he only had 37 total tackles.

English has been projected as a early second round pick and is reportedly drawing interest from the Patriots who hold the second pick in the second round.

If the Chiefs intend on making a run at English, they might have to trade down to the end of the first round to snag him before the Pats do.

H/T SayHeyWerd in the FanShots