Chiefs' Chances at a Trade Down with the Eagles Dwindling?

Share All sharing options for: Chiefs' Chances at a Trade Down with the Eagles Dwindling? 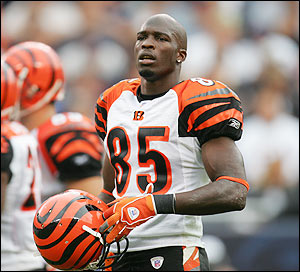 Could Chad Johnson put a damper on the Chiefs trade down plans?

When we've been talking about what the Kansas City Chiefs should do with the 3rd pick in the 2009 NFL Draft, a common scenario continues to come up that involves trading down.  We've looked at other top ten pick trades in previous drafts and concluded that two first round picks would be the starting point for any trade down scenario.

The Lions, Broncos and Eagles have two first round picks.  The Lions have the 1st and 20th picks so they're not a realistic trading partner for the Chiefs.  I've hashed out my reasons why I don't think the Broncos are a realistic option for a Chiefs trade down.

That leaves the Eagles, who are apparently shopping one of their first round picks.  Specifically, rumored interest includes the Cincinnati Bengals Chad Johnson and the Buffalo Bills Jason Peters.

ESPN's Michael Smith said the Eagles might be looking at sending a first rounder to Cincinnati in exchange for Ochocinco.

"I am hearing there is interest in Chad Johnson," Smith said. "Now there's been some back and forth as to whether or not he is officially on the market. I think everybody in Cincinnati has signed off on moving Chad Johnson except for owner Mike Brown. The Eagles could be in the picture. They have two first-round picks. They need a receiver."

Smith goes on to say that the Eagles have "engaged in serious discussions" with the Bills regarding the availability of Pro Bowl tackle Jason Peters, who would likely command a first round pick.

Remember the Eagles worked out LT Eugene Monroe, so they're certainly entertaining the idea of a trade into the top five of the draft.

While trading down may be the best option for the Chiefs, the chances of finding a partner with enough ammo to pull the trigger on a deal is in question.