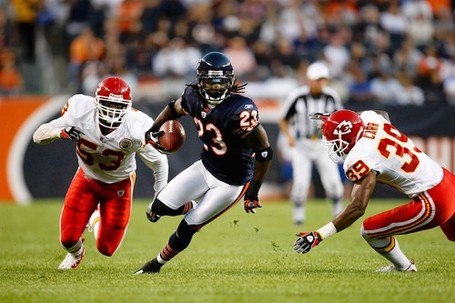 "Same Old Chiefs" was kind of the theme of last season between Chris and I.  It seemed like we were blogging about the same thing over and over again, week after week, game after game.  The season dragged on and the defense continued to do the same things over and over again to little avail. The team would play a decent first half, only to inevitably collapse in the 3rd and 4th quarters.

So what has really changed with the Chiefs' defense?

The Chiefs re-signed S Jon McGraw and tendered S Jarrad Page with a second round tender as a restricted free agent.  I think most of us will agree that both these players warranted being re-signed (especially considering the poor state of the Chiefs defense).

So what have we really done?  Are you telling me a semi-scheme change in the defense will be that much of a boost?

Let's say the Chiefs ignore the offensive line and go defense with their first two picks in April's draft.  Are these draft picks (only two of which can likely be depended upon to start) going to have a bigger impact than Jason Babin and Rocky Boiman and Donnie Edwards (when healthy) and Patrick Surtain (when healthy)?

As someone who's firmly entrenched in the mindset that it's easier to win consistently for years with a great defense and mediocre offense (vs. a great offense and mediocre defense) I'm coming to grips with the fact that the Chiefs defense has a very good chance of being almost as terrible as they were last year.

The acquisitions during free agency, while definitely upgrades in certain spots (Vrabel and Beisel), aren't nearly enough to warrant any game-changing predictions about the Chiefs defense.

With all that said, I know I'm being impatient.  As Chris blogged in early March, the Chiefs shouldn't expect more than an 11 spot defensive ranking boost on average over the course of the next season.  But, in most of those cases, the offseason acquisitions have been more than a 34 year old linebacker.

Only the Lions would do the same thing over and over again and expect different results.