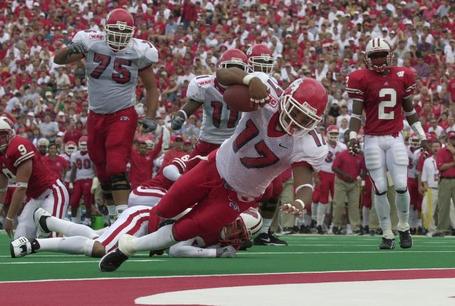 The Kansas City Chiefs announced the signing of wide receiver Rodney Wright and long snapper Tanner Purdum.  No details of the contracts were released.

We first heard about the signing of Purdum on Friday. The Chiefs released former long snapper J.P. Darche on March 19th.

Purdum was a four year letterman with Baker University from 2004-2007.  He caught on with the Baker coaching staff last season working with the wide receivers.

Coming out of Fresno State where he holds the school record for career receptions, single season receptions and yards, Rodney Wright was a 7th round draft pick by the Buffalo Bills in 2002.  He dwindled around on their practice squad for a couple of seasons before catching on with the San Jose Sabercats of the AFL.

Does this sound familiar?  He was highly productive in the AFL with over 4,000 yards and 42 TDs in four seasons.

Is it possible we have another Bobby Sippio on our hands?

At least Bobby Sippio didn't have the off-the-field problems that Wright did.  Apparently, he was involved in a hit-and-run after being drafted.

Detective Robert Beckwith said Wright was driving a vehicle that struck a van and caused it to hit a post and burst into flames. The two people in the van received minor injuries.

Then, just over a year later, Wright was arrested on charges of DUI, driving without a license and making an unsafe lane change when he caused another accident.

Considering these incidents were over five years ago, it's unlikely we can draw any parallels to the Chiefs willingness to sign a guy like Wright and their willingness to keep a certain running back with legal troubles on the roster.

Shockingly, I can't seem to make the Pioli/Haley/Parcells connection with either of these players. It looks like our management team may be branching out a bit.

H/T Vince D in the FanShots