Let me first start off by saying I am on the fence about this myself. While we have been in this dead period after the meat of free agency and before the draft we have covered a lot of different trade scenarios for the Chiefs. There has certainly been a lot of Crabtree talk but not much talk about trading for an established receiver. 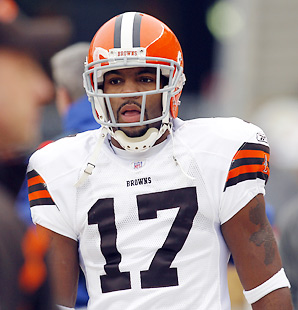 The Browns are definitely entertaining offers for this guy. John Clayton over at ESPN thinks that Edwards would go for a 1st and a 3rd round pick. I think that sounds about right. Maybe a team could grab him for a 1st and 4th. When I read that it got me to thinking. What if the Chiefs acquired Edwards?

There is an obvious upside. We have a new, young QB starting his first season with the team. The more receiving help we can get him the better. We already have Bowe and Tony G. Plug in a guy like Edwards, with Engram in the slot and you have a nice mix of veteran talent, youth and speed for your new franchise passer. This would be certain to speed up Cassel’s learning curve. 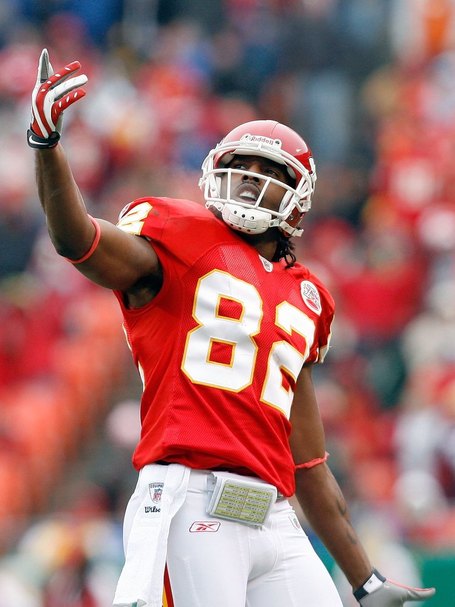 The nightmare here would be if Edwards keeps dropping passes but I don’t think that will happen. I see last year as more of a fluke year for him. If he returns to his 2007 form where he had 1289 yards receiving with 16 TD’s and D-Bowe throws in a 1000 yards of his own the Chiefs are going to have a sick offense.

I took a look at the NFL Draft Value Chart and I decided to value Edwards as a mid 1st round pick, or #16 for 1000 points. If the Browns want a 1st and a 3rd for him then the 16th pick in rounds 1 and 3 would put his value at 1,190 points. Obviously this is just my opinion about his value but it gives us a bit of an idea of what the Chiefs would have to give up to acquire him.

Obviously it would be foolish for the Chiefs to give up their first this year, as they have no 2nd round pick. However, I still think it can be done.

I propose this 2-part scenario.

If Edwards has a value of around 1,190 points the Chiefs would be giving the Browns exactly what they want. I am sure the Browns would be happy with this deal and would take it.

I know what you are saying. Patrick, this is a terrible trade for the Chiefs. We would now be without a 2nd rounder AND a 3rd rounder which would leave us little chance of shoring up our D or O line for this season PLUS we’d be out a 1st round pick next year. I agree completely. I do not think this would be a good trade for the Chiefs unless part 2 of my suggested scenario can work.

The Browns have had their share of day one busts. See Couch, Tim. I am sure they would be happy to have a sure thing in LB Aaron Curry. Unfortunately for the Browns, they pick at #5 and it is unlikely that Curry will fall that far given Kansas Cities need for help at LB.

The #4 pick in round 2 is worth 540 points. I doubt the Browns will want to give up their early 2nd rounder as they have so few picks this year but hell, if we throw in LJ they might go for it.

The more likely scenario is they give us the 18th pick which is worth 400 points and maybe a player or a later round pick.

Normally I wouldn’t think a team would trade a 2nd rounder to move up two spots to get one guy but the Browns have a surplus in the 2nd round. Also, if part two of the deal was a condition of the Edwards deal then the entire deal is fattened for the Browns who are getting an early 3rd rounder this year and an extra 1st next year.

This is a trade I think works for both teams. Currently the Browns only have a first rounder, two second round choices, no third rounder, a fourth, no fifth and a sixth. This is due to Phil Savage foolishly going "all in" on last season’s team.

After the trade with the Chiefs the Browns would have Aaron Curry, an early or mid 2nd rounder (plus maybe LJ), an early third rounder, a fourth and a sixth plus KC’s 1st rounder next year.

The Chiefs would come out with the 5th pick, an early or mid 2nd rounder, 4th, 5th, 6th and two 7ths. Add to that Matt Cassel and Mike Vrabel and Braylon Edwards.

The Chiefs could still snag a LB of they like Orakpo or Everette Brown or they could solidify the o-line with Andre Smith. KC could then use their newly acquired 2nd rounder and third round for defensive needs.

I don’t know about you but I like an offense with Cassel, Edwards, D-Bowe, Tony, "Smash and Dash  Kolby Smith and Jamaal Charles," with Brandon Albert, Andre Smith and Brian Waters on the O-Line.

I know a lot of trade scenarios proposed on the boards have been absurd and mine obviously depends a lot on the Browns taking a 1st rounder next year and wanting to give up a 2nd rounder to get Curry but I think it is possible. Curry is a much safer bet than the 18th pick in the second round and I feel like the trade works out for everyone.

I may also be crazy.

What do you guys think?

Should the Chiefs try to acquire Braylon Edwards?