Maybe the Chiefs Shouldn't Mess with USC Either

Share All sharing options for: Maybe the Chiefs Shouldn't Mess with USC Either 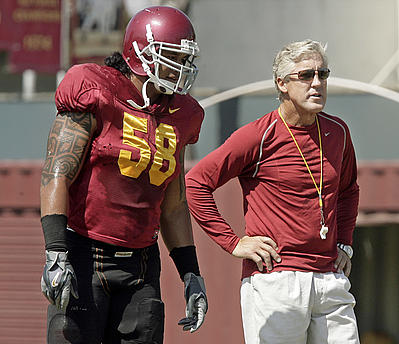 Yesterday we talked about the shortcomings of University of Texas players in the NFL, mostly because Brian Orakpo is an option for the Chiefs with the 3rd overall pick.  I wasn't trying to knock the Texas program, especially after I sat in the stadium in Austin with 80,000 people yelling Hook 'em Horns as they put a pummeling on Missouri last season. But I just wanted to point out an interesting trend (is it a trend?) about players from Texas.

That said, I wanted to note the recent 1st round picks by some of so-called NFL factories. Like Texas, USC sends a good chunk of their roster each season to the NFL.  And like Texas, a number of those are 1st round picks.

The Texas list of pro talent wasn't so compelling.  How does USC stack up in the last decade?

Taking into account the general rule that you can't fully judge a draft class for three years, I see three busts (Williams, Udeze, R. Jay Soward), Claiborne hasn't been in the league since 2006, and then Bush and Leinart who haven't necessarily justified their draft position yet.  Of those nine picks, Patterson, Palmer and Polamalu are the only three of the nine that have fully panned out so far.

Other schools, like LSU and Tennessee, have better first round talent than USC in the last decade. Yet USC has played in a third of those national title games.

I know this argument is a bit of a stretch because ultimately the school doesn't really determine what kind of NFL performer the player will be.  Mark Sanchez, Rey Maualuga, Clay Matthews and Brian Cushing could all be fine players.  But the first round talent out of USC in the last decade isn't quite what I thought.

I don't expect Scott Pioli or any of the other Chiefs' scouts to put much stock into something like this.  While there may be a few busts or players that haven't necessarily justified their draft position, there's also a franchise quarterback and arguably the best safety in the game.  High risk can also create high rewards.

Besides, now that Carl Peterson is gone, it's about time the Chiefs get some USC players on their team. I don't suspect Pioli, being from Central Connecticut State University, will bring his college grudge with him.