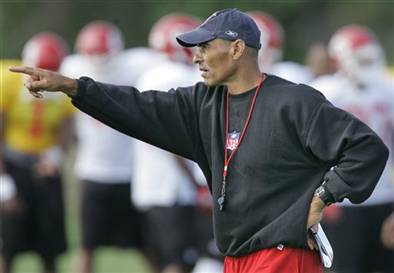 Todd, that's where I used to stand during OTAs...in eye sight of the ice cream truck!

The NFL released a schedule of the Kansas City Chiefs organized team activities.

In reality, these sessions are pretty boring but they're a sign that the real NFL offseason has started.  From our experience, Warpaint Illustrated has the best coverage of these events so we'll keep you up to date on all the happenings at the OTA sessions.

A rule that is likely broken every year during OTAs is the non-contact rule.  Teams are not permitted to conduct contact drills.  The Texans were the latest team to be accused of violating this rule.

Following last season, an Outside the Lines segment on ESPN provided video footage of players participating in contact drills, which were not allowed at the time.  The Texans actually lost three players for the season during the non-contact portion of the offseason.

Despite the video evidence, the NFL rejected the grievances filed by the players.  Huh?  Yeah, exactly. I don't get it either.  Per reports at the time, Houston faced losing a week of OTAs and a fine to the head coach for the first violation.  The second violation could result in the loss of a 4th round draft pick according to the current Collective Bargaining Agreement.

The Chiefs currently have 14 OTAs scheduled, the maximum allowed.  Because the Chiefs have a new head coach, they are actually allowed two extra voluntary mini-camps, which usually begin in mid-June.

Get excited Chiefs fans.  A month away from actual practices is just another sign of the ever-shrinking NFL offseason.