Share All sharing options for: Chiefs Workout a Running Back; LJ Insurance? 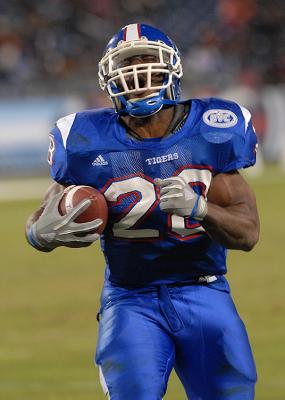 This news is coming out an interesting time - hours after the announcement that the Chiefs will not be obligated to pay the remaining guaranteed money in Larry Johnson's salary should the team release him.

Dan over at Mocking the Draft ranks him as the 21st running back in the 2009 draft class.

With his size he appears to be in a similar mold to Larry Johnson and would fit well as the thunder to Jamaal Charles' lightning.  Here's what one scouting report said about his ability at the next level:

Strong and powerful build runner. Tight hipped inside runner. Good lower body strength and leg drive. Likes contact. A very willing blocker. Has balance and burst, although he is not fast (4.6). Will not turn the corner on the NFL. Has basically no experience as a receiver. Is smallish and tends to get lost inside.

He sounds like an interesting prospect, especially as a second day pick.  You gotta love any player that's described as a "willing blocker".  But what's up with the regression in his statistics?

He registered over 180 carries in all four seasons at Tennessee State and doesn't have any fumbles on record (at least according to ESPN.com).  Isn't that amazing?  (Ed. Note: Maybe too amazing. H/T Vince D)

What worries me is the regression from '06 to '07 to '08. He missed two games last season due to injury which accounts for part of his slip in '08.  His yards per carry, however, remained consistently high and he increased his touchdown total each year despite getting less carries.

In spite of those two missed games last season, he garnered Offensive Player of the Year honors for the Ohio Valley Conference.

The Ohio Valley Conference site has some more information on a few of his accomplishments:

Javarris Williams completed his career at Tennessee State and the OVC by rushing for 4,329 yards, the fifth-highest total in league history and fourth-highest mark nationally among active players. In 2008 he ran for 1,037 yards and 15 touchdowns in 10 games (he missed the final two games of the year due to injury). That marked his third-straight season with 1,000 or more yards and his 103.7 yards/game ranked 26th nationally while his 9.60 points per game was the seventh-highest total in Football Championship Subdivision (FCS) play.

Who knows if the Chiefs are just doing their due diligence scouting a player like Williams or if this is a sign they plan to dump Johnson and draft a rookie.

One thing is for sure though when it comes to Williams - he'll be ready to play anytime he's asked to. In fact, he turned down offers from Big 12 schools for the opportunity to play right away for Tennessee State.

Putting football as a number one priority and playing because you love the game - where have we heard that before?