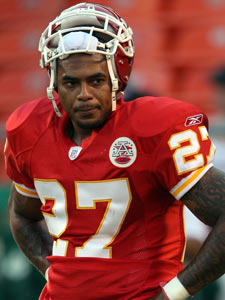 Plaxico Burress and the NFLPA won a grievance against the New York Giants for withholding a $1 million payment of his $4.5 million signing bonus due to him last December according to Pro Football Talk.

Under Article XIV, Section 9 of the CBA (via PFT), a team may withhold a quarter of the allocated signing bonus in a given year if the player does something to get himself suspended.

If you remember, NFL special master Stephen Burbank heard the case for Plaxico Burress and the Kansas City Chiefs Larry Johnson simultaneously because they were sufficiently similar.

Since Larry Johnson was suspended by Commissioner Roger Goodell for one game last season, the Chiefs are arguing that they can withhold future guaranteed base salaries.

The cases were presented by NFLPA lawyer and former interim Executive Director Richard Berthelsen last Wednesday. A decision was expected within a week.

The current collective bargaining agreement doesn't have any explicit direction on whether future guaranteed salaries can be withheld if the player did something get himself suspended.

There hasn't been a case identicaly to Johnson's so the decision will set a precedent heading into the final year of the current CBA.

It's been reported by the Kansas City Star's Adam Teicher that the Chiefs are likely to release Johnson depending on the outcome of the grievance.  If the Chiefs win, it gets them off the hook for approximately $3.5 million in guaranteed money meaning they would likely suspend him.

But if special master Burbank again sides with the player in Johnson's case, it's unclear what the Chiefs would do with him.  If he's on the opening day roster, Johnson's 2009 base salary of $4.55 million would become immediately guaranteed.

But one thing is clear, we're getting closer to determining the future of Larry Johnson in Kansas City.