Share All sharing options for: Chiefs Shouldn't Mess with Texas in NFL Draft 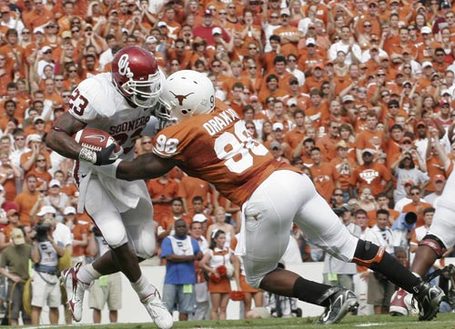 I made the trek out to the site of the 1904 World's Fair St. Louis this weekend which made for plenty of time to listen to the NFL channel* on Sirius Satellite Radio.

*Seriously, the NFL world is obsessed with the Jay Cutler trade.  Every couple of hours when a new set of hosts would come onto the show they would break down the Cutler trade again. And again. Then they would take calls from folks who wanted to talk about the ramifications of the trade for their team.  I'm obsessed with the NFL as much as the next guy but I am so tired of talking about this trade.

One of the topics discussed was the success, or lack thereof, of University of Texas players in the NFL draft, specifically the first round.  UT has fielded dominant teams in the NCAA, even winning the Rose Bowl in 2006. But the talent they send to the pros is lacking.

From my perspective, there's one player (Casey Hampton) whose justified his draft position.  There are a few players, like the DBs selected in the last few years and Vince Young, who could still blossom into 1st round-type talent but have yet to demonstrate that.

I'm not putting much stock into Orakpo's potential based on a handful of other flameouts to make their way through Austin before hitting the league but it does make me wonder what's going on down there that such a stellar college program produces an unusual amount of busts.