Share All sharing options for: USF Receiver Talks About Private Workout With Chiefs 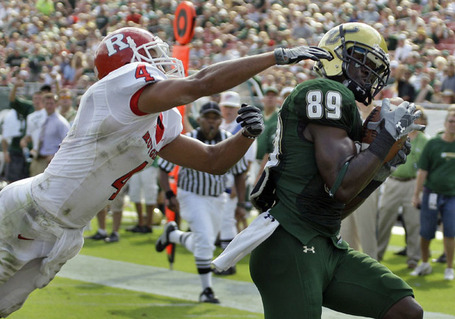 Kansas City Chiefs wide receivers coach Dedric Ward is coming out of a position with the Arizona Cardinals offensive staff under Todd Haley.  We've heard he's been the Chiefs representative at a handful of visits with Chiefs draft interests.

I've always wondered exactly what went on at these private workouts.  There's something about them that's so...private.

With just Johnson, a quarterback and Coach Ward in attendance, the drills sounded pretty boring and makes you wonder how much you can get out of seeing a guy catches passes in shorts.

"We did some ball skill drills too. Things like over the shoulder drills, running down the line, throwing the ball in front of me, behind me, high, low, all the basic wide receiver drills. Have me running a comeback at a certain angle to see if I could find the ball. He said I did real well in everything."

That's not to knock on Johnson. In fact, we talked about him as an intriguing prospect about two weeks ago when we first heard the Chiefs had scheduled a private workout with him.

In fact, he said he would love to play for Coach Ward and the Chiefs.

He told me I did a great job and he liked everything he saw. He said keep up the good work and when he gets back he’ll put a good word in for me with the Chiefs.