Chiefs Sitting on $31.6 Million to Spend

Share All sharing options for: Chiefs Sitting on $31.6 Million to Spend 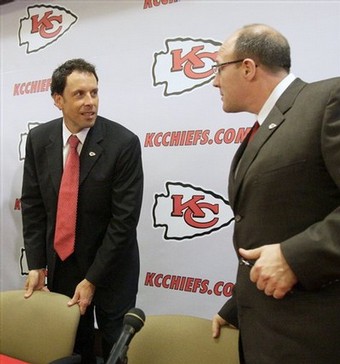 The Kansas City Chiefs have spent approximately $95.4 million on player personnel this season.  Problem is, that's still $31.6 million away from the $127 million salary cap for the 2009 NFL season (H/T Bill Williamson at ESPN for the $31.6 million figure).

This is BY FAR the most amount of cap space remaining in the AFC West.  The Broncos ($12.5 million), Chargers ($7.8 million) and Raiders ($8.2 million) are nowhere near the Chiefs when it comes to cap space.

Below are a few of the places Chiefs GM Scott Pioli has been spending his money.

New GM Scott Pioli spent $14.65 million on his new quarterback, Matt Cassel, but other than that has scraped the bottom of the barrel as far as paying free agents.  He inherited Mike Vrabel's contract from the Patriots (coincidentally one he helped negotiate) and spent a million plus on Zach Thomas and the RFAs.

The cap value of the Chiefs' 2008 rookies was about $11.6 million.  But that was with 12 draft picks.  This year, with only eight picks (and just one first rounder), the Chiefs will likely spend between $6-8 million (we'll be getting more in depth on what the Chiefs can expect to pay their rookies tomorrow).

So, let's say after the rookie deals are done the Chiefs are looking at $24 million to spend.  If you're Scott Pioli, what are you spending $24 million on?